Federal Courts in the 21st Century 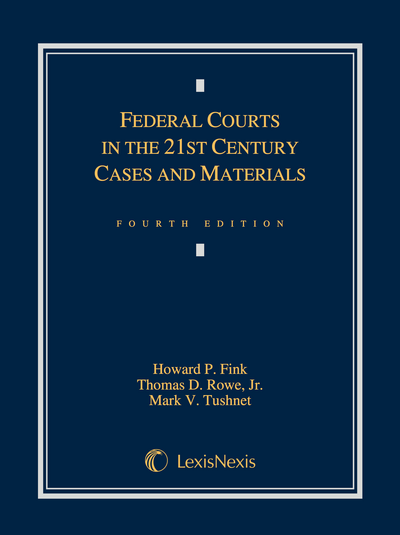 Federal Courts in the 21st Century

View or download the free 2015 Online Supplement for this product.

The Fourth Edition of Federal Courts in the 21st Century is leaner, with tighter focus on the areas usually covered in upperclass courses on Federal Courts or Federal Jurisdiction. The material in chapters on Aggregative Procedure, mostly covering class actions, and on Expanding and Restricting Complex Federal Litigation, covering the likes of various joinder devices, venue and forum non conveniens, and multidistrict litigation has largely been eliminated.

A new Chapter 11 on Doctrinal and Statutory Restrictions on Federal Jurisdiction Related to State-Court Litigation, following the chapters on federal courts' statutory jurisdiction, covers the abstention doctrines and the Anti-Injunction Statute, 28 U.S.C. §2283, previously treated in the complex-litigation chapter. And earlier coverage in the class-actions chapter of the Class Action Fairness Act of 2005 (CAFA) now is part of a new section at the end of Chapter 8 on Diversity and Alienage Jurisdiction. The new section is devoted to the three forms of minimal-diversity federal-court jurisdiction presently on the books - statutory interpleader; the Multiparty, Multiforum Trial Jurisdiction Act of 2002; and CAFA.

The chapters covering areas affected by the Jurisdiction and Venue Clarification Act of 2011 (JVCA), particularly Chapter 8 on Diversity and Alienage Jurisdiction and Chapter 10 on Removal, have been extensively revised to take account of the many (and positive) changes made by the JVCA. Chapter 8 also has a new principal case, Hertz Corp. v. Friend, in which the Supreme Court settled a circuit split over interpretation of a corporation's "principal place of business" for diversity purposes.

The Fourth Edition has a new, concluding Chapter 18 on Federal Jurisdiction in Time of War and in an Age of Terrorism. This chapter's principal case is the Supreme Court's major 2008 decision in Boumediene v. Bush on habeas corpus for alien enemy detainees at the United States military base at Guantanamo Bay, Cuba. This chapter brings together themes from several aspects of the course—the role of the federal courts, separation of powers, the permissibility of "jurisdiction-stripping" legislation, the use of non-Article III federal tribunals, and suspension of the writ of habeas corpus. Included are background on the use of military commissions in United States history; discussion of executive, judicial, and legislative responses to the attacks of September 11, 2001; the Boumediene case itself; and developments since that decision, providing a timely, interesting capstone for the course.