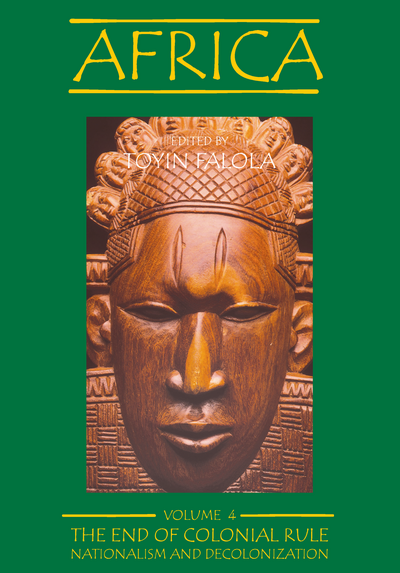 Africa, Volume 4: The End of Colonial Rule: Nationalism and Decolonization

The End of Colonial Rule: Nationalism and Decolonization

In this fourth volume of the Africa series, Falola presents various aspects of African history and culture from the period of World War II to the time when African countries became free of European rule. The book's primary aim is to present the broad picture of Africa in the last decades of colonial rule. The theme of nationalism occupies a prominent place: four chapters are devoted to its analysis, including the contributions of women, which have generally been ignored. This period of African history was also a time of reform, when Africa actually began to see significant changes. Various chapters are devoted to those reforms and other important social aspects of the time, notably health, business, and education. The authors pay attention to the role of Africans in initiating some of these major changes.

In the second part of the book, the themes are analyzed chronologically, focusing on each region in turn. The final part reflects on what colonialism meant for Africa, both during the period of European rule and since independence. The concluding chapters prepare the reader to understand contemporary Africa, which is covered in Volume 5, the last in the series. This is the fourth volume in a series of textbooks entitled Africa. Contributors to the volumes are African Studies teachers from a variety of schools and settings. Writing from their individual areas of expertise, these authors work together to break stereotypes about Africa, focusing instead on the substantive issues of the African past from the perspectives of Africans themselves. The organization of the books is flexible enough to suit the needs of any instructor, and the texts include illustrations, maps and timelines to make cultural and historical movements clearer. Suggestions for further reading that will help students broaden their own interests are also included. Africa challenges the accepted ways of studying Africa and encourages students who are eager to learn about the diversity of the African experience.

"...[T]his volume delivers the goods wonderfully well. Its strength lies in its readability for the target audience. Its writers are interested in communicating and bear their expertise gently." — Journal of African History, Volume 45, 2004