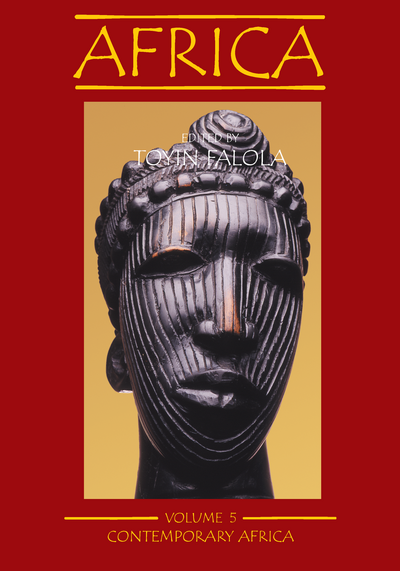 Contemporary Africa, edited by Toyin Falola captures the challenges, optimism and problems that face modern Africa, notably those of economic underdevelopment and political instability. African countries seek various answers, and they have recorded varying degrees of success as they attempt to unite their peoples to build strong nations, develop their economies, and stabilize their politics. Failures have equally been recorded in a number of places, although these have not prevented the search for new solutions nor dampened the enthusiasm of Africans in liberating themselves from poverty. Among the leading issues that the volume pays attention to are: the achievements of independence, the colonial legacy, Africa's place in global affairs, economic development, political instability, and the challenges of renewal in the 21st century.

This is the fifth volume in a series of textbooks entitled Africa. Contributors to the volumes are African Studies teachers from a variety of schools and settings. Writing from their individual areas of expertise, these authors work together to break stereotypes about Africa, focusing instead on the substantive issues of the African past from the perspectives of Africans themselves. The organization of the books is flexible enough to suit the needs of any instructor, and the texts include illustrations, maps and timelines to make cultural and historical movements clearer. Suggestions for further reading that will help students broaden their own interests are also included. Africa challenges the accepted ways of studying Africa and encourages students who are eager to learn about the diversity of the African experience.