Piercing the Veil of Secrecy 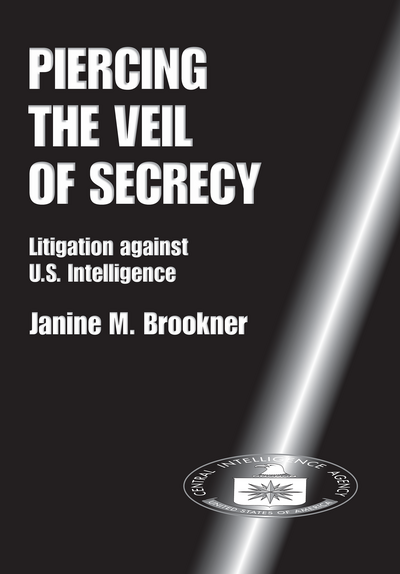 Piercing the Veil of Secrecy: Litigation against U.S. Intelligence

Piercing the Veil of Secrecy

Piercing the Veil of Secrecy brings together and exposes, for the first time in one publication, the magnitude of adverse actions U.S. intelligence agencies take to control and thwart the legal process and the range of concrete remedies available to confront such tactics.

Brookner begins the book with a description of actual CIA employee cases, followed by a discussion of unique problems litigants and lawyers face when suing intelligence agencies, including the misuse of secrecy and national security, intimidation, and the denial of access to relevant evidence and witnesses, notwithstanding a lawyer’s and plaintiff’s security clearances. Recently, the CIA has invoked the seldom-used state secrets privilege to impede discovery, prevail upon the courts to dismiss cases, and, in effect, grant itself immunity from suits. These problems, as well as sovereign immunity and the various statutes from which the CIA is exempted, are carefully examined.

After dealing with what cannot be done, the book devotes itself to what can be done, including legal remedies, which maximize prospects for a favorable outcome. This discussion includes employment discrimination, torts, constitutional violations, employment-related civil conspiracies, and the innovative possibility of suing the government under civil RICO. The final chapter suggests administrative and procedural solutions to the serious inequities with which a litigant is confronted when bringing an action against U.S. intelligence.

The book is intended for lawyers and plaintiffs suing or contemplating suing the U.S. government, particularly those agencies that handle classified information. The target audience includes judges, senators, and members of congress who need to be aware when deciding cases or making laws of just how unlevel and unfair the playing field actually is. Government attorneys, law students and professors, and national security, civil rights, and employment rights law groups are among the potential readership as well.

“[Brookner] has created a practical resource that draws on her own experiences to help others navigate their way through a system that appears stacked against them… The book contains a good table of authorities for caselaw, statutes, and regulations… Anyone considering a career in U.S. intelligence would be well-advised to read this book; it is a chilling account of the rights that such employees give up, and what they are up against if things go wrong.” — Legal Information ALERT

“[B]eneath the legal prose is a passionate indictment of an agency that, Brookner contends, shields its misdeeds with the cloak of national security.” — The Washington Post, March 10, 2004