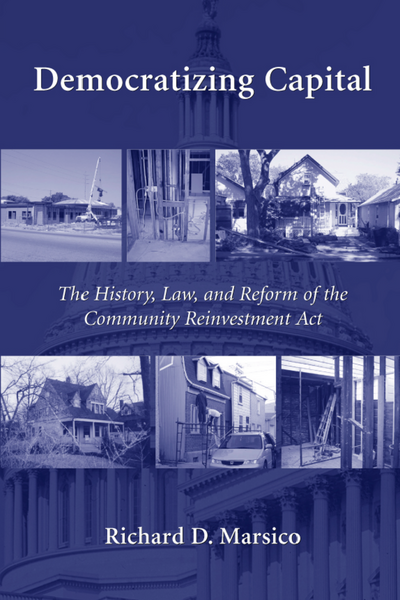 The History, Law, and Reform of the Community Reinvestment Act

Since 1977, the Community Reinvestment Act ("CRA") has required banks to meet the credit needs of their local communities, including low-income neighborhoods. Since then, banks have committed to make more than $1 trillion in loans for housing, small businesses, small farms, and economic development in low-income neighborhoods. Despite this record, the CRA and its implementing regulations have been unsatisfactory to banks, advocates, and even bank regulators charged with enforcing the law. Author Richard Marsico traces this dissatisfaction to an imbalance in banking regulators' resolution of the CRA's tension between requiring banks to lend to low-income neighborhoods, but not requiring them to allocate credit, resulting in a CRA enforcement regime that is unpredictable and inconsistent. It will be relevant to people interested in studying, understanding, enforcing, complying with, and improving the CRA, including students, scholars, government officials, bankers, attorneys, and activists. It can be used as a supplement to a traditional banking course, in community economic development and clinical courses, and in other courses that focus on urban policy, law and social change, community organizing, and economic justice.