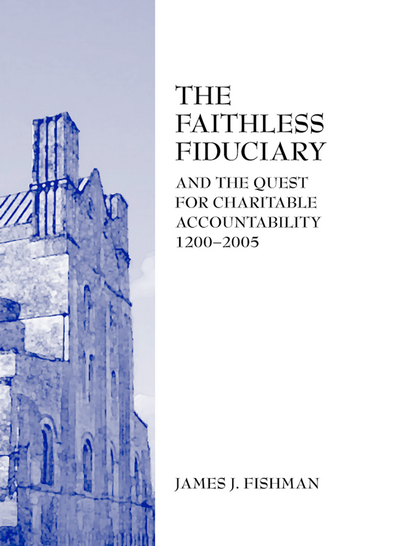 In recent years the nonprofit sector has been subject to numerous scandals, which have tarnished its reputation and brought demands for stricter regulation. It is often assumed these misdeeds reflect a recent change in the behavior of charities and of charitable fiduciaries, the people who work for nonprofits or serve on their boards. The reality is otherwise. Chicanery involving charities is timeless. The Faithless Fiduciary examines the enduring problem of opportunistic behavior by charitable fiduciaries, and the inability to create an effective system of oversight or accountability for charitable assets.

The Faithless Fiduciary and the Quest for Charitable Accountability traces charity scandals, as well as attempts to counter such behavior from the thirteenth century to the present. One vehicle for examining the persistence of opportunistic fiduciary behavior is the Hospital of St. Cross, an almshouse founded in the twelfth century outside of the City of Winchester in Hampshire, England. St. Cross still serves the poor and offers a contemporary visitor, though unlikely to be a pilgrim on the way to Canterbury, a draught of beer and some bread. What is unique about this venerable charity is the recurrence of fiduciary wrongdoing by its leaders through the centuries in 1190, 1304, 1320, 1372, 1576, 1696, and 1853. Crossing the Atlantic, The Faithless Fiduciary examines charity scandals from the beginnings of European settlement to the present.

This author offers several propositions: 1) a favorable attitude toward philanthropy has existed since the thirteenth century in both society in a normative sense and through the legal system's protection of charities; 2) many fiduciaries, regularly, in almost all contexts and periods, have breached their trust; and 3) the attempt to regulate charities and fiduciaries largely has been ineffective. The Faithless Fiduciary concludes with a proposal to make charities more accountable.

"Jim Fishman is a good storyteller, and these stories — of charitable abuses over the centuries — are well researched, well analyzed, and well told. Professor Fishman's historical perspective is critically important today for anyone interested in the nonprofit sector. This book is required reading for practitioners, policy makers, government regulators, and scholars." — Harvey Dale, University Professor of Philanthropy and the Law at the NYU School of Law

"In this extraordinarily instructive and often dramatic volume, Professor Fishman chronicles eight centuries of governmental efforts, on both sides of the Atlantic, to deal with greed and sloth on the part of charitable officers and other fiduciaries. His relentless and imaginative scholarship yields an unmatched legal history of what he calls 'the quest for charitable accountability' and, at the same time, a series of absorbing scandal stories—from British almshouse corruption in the twelfth century to the crimes that sent United Way's chief executive to jail in 1995. The book ends with a fresh and promising proposal for the future policing of charity's faithless servants." — Professor John Simon, Yale Law School

"Professor Fishman's thoroughly researched, well-documented history demonstrates that something must be done to protect the intended recipients of charity — and the general public — from 'the faithless fiduciary.'" — Harvard Law Review