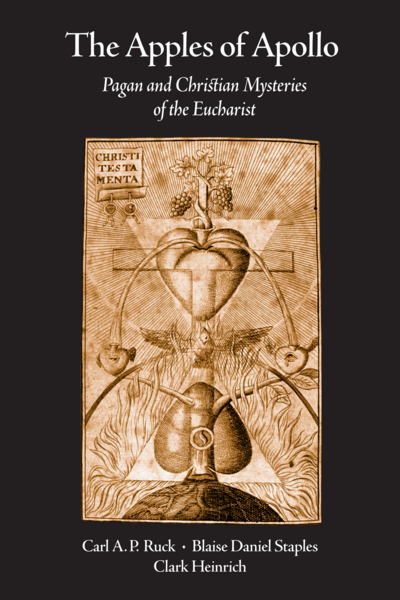 Pagan and Christian Mysteries of the Eucharist

When the apostle Paul proclaimed the new Christian Mystery to the factious congregation at Corinth, it was clear that this Eucharist was meant to replace the pagan Mystery that had been celebrated for over a millennium just a short distance away at the sanctuary of Eleusis. Christianity evolved within the context of Judaic and Hellenistic healing cults, magic, shamanism, and Mystery initiations. All four of these inevitably imply a sacred ethnopharmacology, with traditions going back to earlier ages of the ancient world. The essays in The Apples of Apollo edited by Ruck, Staples and Heinrich attempt to uncover the original food of the sacramental communion.

After a preliminary review of the rites and etiquette of the sacramental wine of the god Dionysos, whom Christ would replace as sacrificial offering, the myth of Ixion (who is named for the semi-parasitic plant called mistletoe) is linked to Apollo's role in demanding human victims and the persistence of such rites in the Druidic solstice sacrifice of the "wicker man." Behind the symbolism of the mistletoe and other psychoactive plants lurks the Soma of the Vedic tradition and its botanical original, the fly-agaric mushroom. Rather than being marginal to Classical culture, the fly-agaric, and the array of metaphors its amazing transmutations suggest, is central to the myths of the Greek heroes, and in particular to the first of them all, the hero Perseus, who reformed the religion practiced at the ancient city of Mycenae.