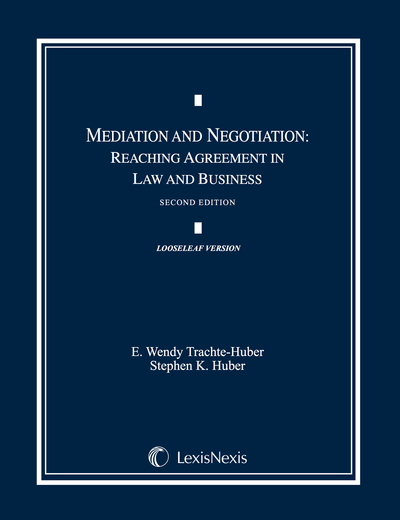 Reaching Agreement in Law and Business

The subject matter of these teaching materials is consensual dispute resolution processes, predominantly mediation and negotiation. These materials focus on business transactions, defined broadly to include employment and consumer disputes. The only important exceptions are two forays into criminal law. Plea bargaining is examined as an important example of negotiation and victim-offender mediation is discussed as an interesting use of mediation. The central omission, compared to other dispute resolution books, is the total exclusion of family matters, notably divorce and child custody.

This book is divided into five parts. Part I introduces the subject matter of the course, and examines dispute resolution generally. Part II introduces negotiation, the core dispute resolution process. Part III is composed of three chapters devoted to mediation-facilitated negotiation. Part IV considers examines additional ADR processes and procedures that involve the use of a third party neutral. Court-connected ADR processes, including early neutral evaluation, summary jury trial, non-binding arbitration, and mediation at the appellate court level are considered. ADR processes other than mediation are also considered, including the mini-trial used in business disputes, private binding arbitration, collaborative law, the use of an ombudsman, and partnering and dispute review boards used for large dollar construction projects. This part also considers government use of ADR and negotiated rulemaking. Part V considers the dispute resolution professional including qualifications and standards, potential errors and omissions liability, ethical issues, and systems design—the process of planning for and avoiding disputes. The Teacher's Manual presents exercises, problems, and role plays, along with suggestions about their use to further pedagogical goals.