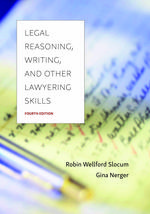 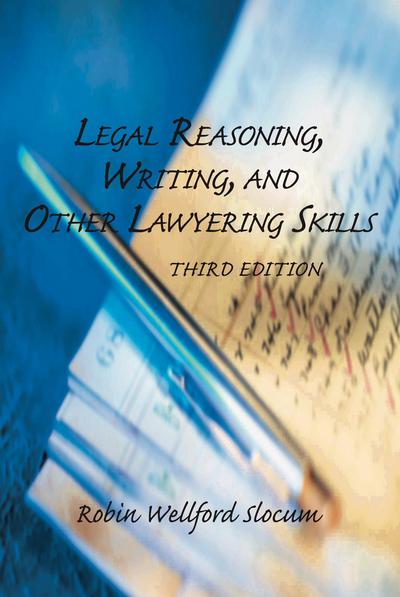 Legal Reasoning, Writing and Other Lawyering Skills, 3rd Edition (formerly known as Legal Reasoning, Writing, and Persuasive Argument), draws on lessons from neuroscience and psychology to deepen students' understanding of self and others, and of the emotional biases and filters that undermine their efforts to "think like a lawyer."

Legal Reasoning, Writing, and Other Lawyering Skills, 3rd Edition, retains the same core chapters of earlier editions that emphasize and illustrate the "process" of thinking through, and writing about, a client problem. However, the new edition expands its coverage to include the practicalities of modern-day legal practice, and also expands the lawyering skills that are introduced in the book. In this new edition, the book can be used in a typical two-semester legal skills course, as well as more intensive two-semester courses, and three- and even four-semester courses.

Some of the exciting new coverage of Legal Reasoning, Writing and Other Lawyering Skills includes:

Psychological Factors that Impair Thinking: Students often become enmeshed in viewing legal problems through a myopic lens that reflects their limited and often superficial worldviews. They frequently leap to premature (and often faulty) conclusions, and then stubbornly cling to their positions while ignoring evidence suggesting that they are wrong. One reason students struggle is because poor judgment and a myopic perspective cannot be solved through the logic of the analytical mind. Instead, modern neuroscience suggests that such problems stem from the emotional centers of the brain, and that the answer isn't to appeal to "reason," but to address the hidden emotional biases and selective perceptions that cause such problems in the first place. This new edition educates students about the "emotional brain," helps them recognize the red flags that indicate their judgment is impaired, and teaches students how to "prosecute" their own thinking (Chapter 4).

Short Memos — The "Thin-Sliced" Analysis: In recent years, short memos have become the norm, while longer, more formal memoranda are used more infrequently. Nonetheless, drafting effective short memos that are both succinct and thorough requires a level of expertise that is often beyond the skill level of a novice writer. The new edition of this book reflects the reality that the formal office memorandum serves as an important foundation for students to learn the fundamental skills they can later transfer to shorter, more succinct memos. Therefore, while retaining the core chapters on formal office memoranda, the new edition also includes a new chapter on short memos (Chapter 19). For purposes of illustration, the new chapter uses the same hypothetical problem illustrated in earlier chapters of the book so that students can compare and contrast the strategies used in drafting more traditional memos with the strategies used in drafting short memos.

Expanded Coverage of the Lawyer's Roles: Previous editions of the book addressed the lawyers' roles as advisor and advocate, and, within each of these roles, focused exclusively on the skills of legal analysis and writing. Coverage in this edition now includes:

Lawyer as Investigator: Students often have difficulty appreciating "context" in a simulation course; yet understanding the context of a legal problem is invaluable in helping students grasp the roles they are being asked to assume. For those programs in which there is time to accommodate a client interview, the new edition includes a chapter with a step-by-step approach to eliciting the relevant facts from clients. And, in keeping with the broader vision of the book, the chapter also educates students about the hidden biases and concerns their future clients are likely to bring with them to client meetings, and concrete ways to probe for aspects of their clients' stories that are more challenging to uncover (Chapter 5).

Lawyer as Advisor/Collaborator: For those programs in which there is time to accommodate a client counseling meeting, the new edition includes a chapter describing the lawyer's role as advisor/collaborator, and detailing a step-by-step approach to such a meeting (Chapter 22). Even if there is no class time for students to role-play client meetings, the illustrations still provide valuable context for students to appreciate how their written advice to clients might ultimately be received and how their advice sets the stage for subsequent client meetings.