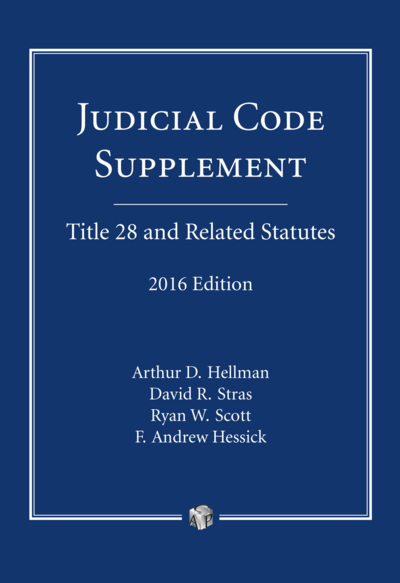 The Judicial Code — Title 28 of the United States Code — contains the primary statutes relating the power and organization of the federal judiciary. It accordingly provides the framework for any study of Federal Courts. But the Judicial Code is not a static compilation; in almost every session, Congress makes one or more changes to its provisions. Some of the changes are minor, like realigning the judicial districts within a state or conforming a statutory provision to a change in the Federal Rules of Civil Procedure. But other amendments establish new ground rules for litigation or raise constitutional questions that are of interest from a Federal Courts perspective. For example, in 2011, Congress made significant revisions to the Code sections that govern removal of cases from state to federal court under the general removal statute. A year later, Congress amended the federal officer removal statute in a way that arguably goes beyond the scope of Article III.

This edition of the Judicial Code Supplement incorporates the amendments to Title 28 signed into law through May 2016. Footnotes and textual notes flag substantive changes in the Code since the book's initial appearance in 2005. This feature, unique to our Code Supplement, enables teachers as well as students to trace the evolution of the Code over a period of years.