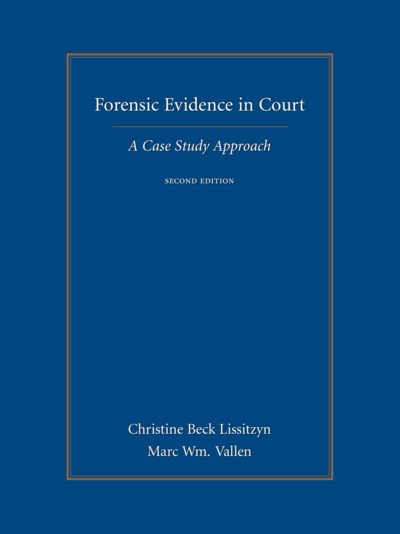 The second edition of Forensic Evidence in Court updates the original version, which was published in 2007. This edition continues to focus on the use of forensic evidence in criminal trials by examining particular case studies. In addition, it adds two new topics:

This edition includes several significant developments in the use of forensic evidence at trial since 2007. The first is the U.S. Supreme Court case, Melendez-Diaz v. Massachusetts, which established a right under the Confrontation Clause of the U.S. Constitution to cross-examine certain forensic analysts. That case involved an analyst who certified that a substance linked to the defendant was cocaine. This right was subsequently extended to an analyst who performed a blood alcohol test. However, when the Supreme Court was asked to rule on the applicability of this rule to DNA examiners, it stated that the examiner would be required to testify only if the results of the test were "testimonial" in nature. The case has been criticized and some lower courts have subsequently refused to follow it.

Another significant development was the release of a report on the scientific reliability of forensic testing in many different areas issued by the National Research Council. The Report, called Strengthening Forensic Evidence: A Path Forward, called for more scientific testing and for standardization in qualification of examiners and in laboratory conditions. The only area of forensic examination that the report viewed as scientifically reliable is DNA. Various government agencies have been established to attempt to implement some of these recommendations. Funding is obviously a huge obstacle to implementing many of the recommendations.

A development in forensics itself involved the extension of newer technologies in DNA testing, including a process called "Low Copy DNA," which tests quantities previously too small to type as well as DNA test kits that can be used at crime sites.

A further development is the expansion of computer hacking, computer fraud and the ubiquitous nature of computers in society. We have added a new chapter to reflect what will continue to be a contentious issue in court— "proving location and events with digital evidence."

Advances in the psychological sciences have results in courts addressing issues of eyewitness testimony. Courts are coming to realize that eyewitness identifications are not as reliable as once thought. As such, courts are struggling with how best to address these issues: through jury instructions, expert testimony, or though some other method. It has come to light that eyewitness identification issues once thought to be within the "ken" of the average juror are most certainly not, and are appropriate for some manner of court intervention.

This book can be used in courses for the following degrees: paralegal, criminal justice, sociology, and political science. Forensic Evidence in Court is also appropriate for use in a legal specialty course. Assignments include case law research, study of rules of evidence, how to select and prepare an expert witness, comparison of legal tests used to admit forensic evidence, study of standards used to review admission of forensic experts on appeal, and written work demonstrating critical analysis.

Any attorney can teach this course, using the Teacher's Manual and sample assignments. Adjuncts experienced in criminal law or extensive use of expert testimony are particularly well suited. Guest lecturers from state forensic laboratories and state law enforcement forensic investigators give added perspective.


"I am really impressed with this text. It is a brilliant piece of educational/legal writing"
— Rex Gay, Portland State University