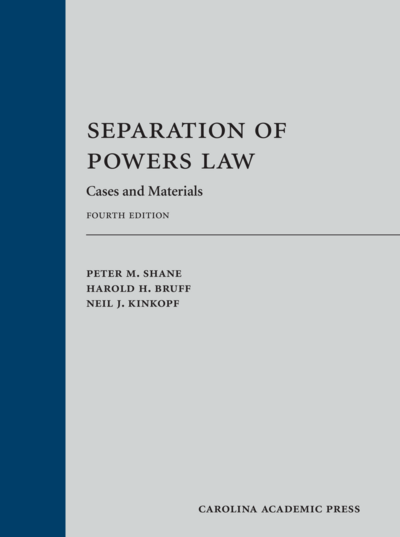 Dramatic issues of presidential power and executive accountability to both courts and Congress have pervaded the news for at least the last half-century. Political polarization and the election in 2016 of an "outsider" president intent on disrupting conventional governance norms have generated a seemingly unprecedented volume of new legal controversies.

This updated edition addresses both separation of powers questions of long standing and many of the hot issues arising in the later Obama years and the early months of the Trump Administration. The authors have wholly revised the text's exploration of the President's "faithful execution of the laws" obligations, significantly expanded the material on presidential authority regarding immigration, and updated the material on presidential regulatory oversight to take account of the latest developments. For the first time in this text, litigation over the Foreign Emoluments Clause makes an appearance. The materials on war powers have been reorganized into two chapters, highlighting how post-9/11 developments have challenged the categorical distinctions between war and peace, battlefield and home front, and domestic and international affairs around which "war powers law" has traditionally been oriented.

The book retains its clear structure and historical perspective, along with the authors' emphasis on the ethical challenges posed for lawyers in the executive and legislative branches who seek to address novel separation of powers issues in professionally appropriate ways.

A resource website is available at separationofpowerslaw.com. Adopters of the book may view additional information by logging onto the site. Faculty may request login information by emailing remeier@cap-press.com.