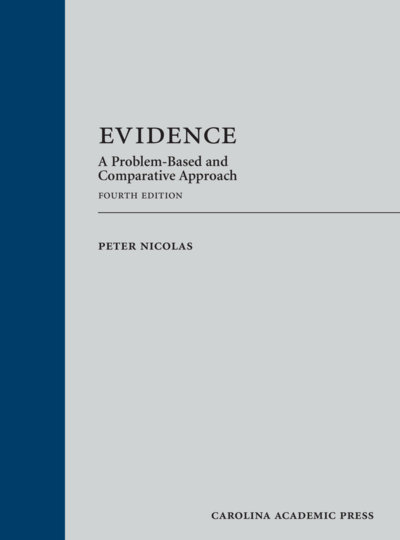 A Problem-Based and Comparative Approach

This casebook provides a comprehensive, problem-based approach to studying the rules of evidence. Organized around the federal rules, this casebook provides coverage of every single rule; yet, through careful case choice and editing, Professor Nicolas has produced a book that can easily be taught from cover-to-cover in as few as three semester hours.

The fourth edition of the casebook builds on the strengths of previous editions while at the same time updating it to reflect recent developments. The text has been revised to include all substantive amendments to the Federal Rules of Evidence through December 2017. The fourth edition contains edited versions of the Supreme Court’s most recent Confrontation Clause decisions, including Williams v. Illinois and Ohio v. Clark. The fourth edition also includes recent decisions applying the rules of evidence to electronic evidence, including cases involving information found on social networking websites. In addition, the fourth edition contains expanded coverage of state rules of evidence that differ significantly from the federal rules. The fourth edition includes more explanatory text in each section of the casebook to help introduce students to the concepts explored in the cases and problems that follow. The fourth edition also includes dozens of new cases to provide students and teachers alike with “fresh” fact patterns. Finally, in an effort to keep the book manageable in length, Professor Nicolas has—as a general rule—tried to remove a page of material for every new page added.

A complementary annual supplement is produced each year that includes the latest developments in evidence law so as to keep the textbook up-to-date between editions. A separate statutory supplement includes the federal rules of evidence and selected legislative history. In addition, the Teacher’s Manual includes detailed answers to all of the problems contained in the casebook.