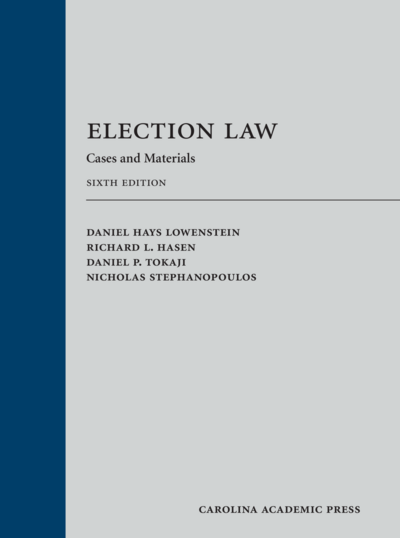 The 2019 Supplement is up-to-date through the end of the Supreme Court’s October 2018 term ending June 2019. The new material includes a completely rewritten section on partisan gerrymandering, including an edited version of the Supreme Court’s June 2019 decision in Rucho v. Common Cause. It also includes coverage of cases and developments concerning the census, partisan gerrymandering, voter purges, voter identification laws, political apparel at the polling place, campaign finance, bribery, and Voting Rights Act challenges to redistricting.

The new student-friendly Sixth Edition of Election Law: Cases and Materials fully covers developments in election law through the 2016 election season, including extensive coverage of campaign finance cases in the Citizens United era; emerging issues in voting rights and redistricting, including recent partisan and racial gerrymandering challenges; and challenges to new voter identification laws and other voting restrictions. It will continue to include perspectives from law and political science, and is appropriate in both law and political science courses. The extensive campaign finance coverage makes the book appropriate for a campaign finance seminar as well.