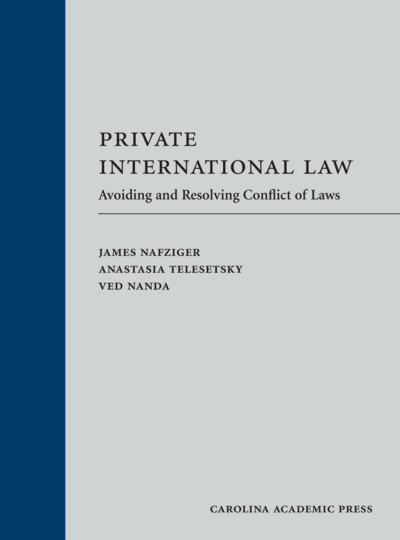 Avoiding and Resolving Conflict of Laws

This coursebook sets new directions in the conflict-of-laws field by, for example, integrating and striking a balance between interstate and international materials. In a world in which individuals regularly cross borders within the United States and beyond, and business contracts span not only the country but entire continents, conflicts law (a.k.a. private international law) is instrumental in resolving disputes where critical events, the disputing parties or both transcend territorial borders. Given the growing interrelationship between private and public international law, two foundational chapters familiarize students with the role of public international law and international issues in the U.S. constitutional system. This book also offers expanded treatment of several topics of increasing importance to legal practitioners: tribal law, international arbitration, complex litigation and avoidance of conflicts litigation.

Aside from its innovations, the book tracks the established structure of the discipline and includes its classic cases, focused primarily on jurisdiction, choice of law and recognition and enforcement of foreign judgments. To sharpen that focus for students, the authors have cleared away much of the underbrush of scholarly citations that might be found in teaching materials. The first two Restatements of Conflict of Laws and the broad contours of the third Restatement, still a work in progress, provide alternative guidance for classroom discussion.