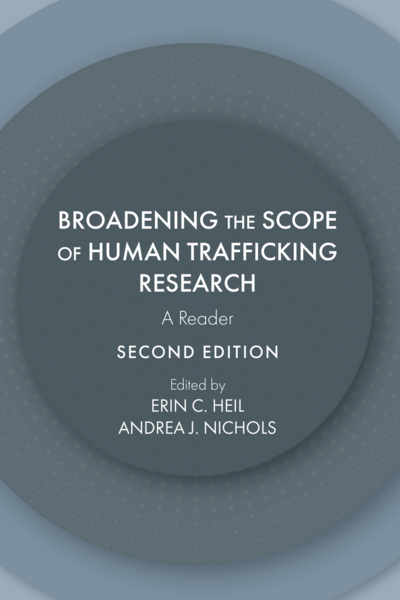 BONUS ONLINE ONLY CHAPTERS:
-Interviews with Human Traffickers: Perceptions of Sex and Violence (Emily I. Troshynski and Jennifer K. Blank)

-A Comparison of DV/ IPV and Sex Trafficking: How Understanding Batterers Can Help Develop Programming for "Boyfriend" Pimp/Traffickers (Erica Michelson)

-The Impact of John Schools on Demand for Prostitution (Eleanor Levine)

Broadening the Scope of Human Trafficking Researchis an edited reader that not only discusses the myriad of types of human trafficking (e.g., sex trafficking, labor trafficking, adoption, child soldiers, organ trafficking, and servile marriage) but also the diversity of victims' identities and the relationship to heightened trafficking risk (e.g., race, ethnicity, socioeconomic status, age, sex, sexual orientation, and gender identity). The second edition includes the addition of four new chapters, as well as updated cases and data in chapters from the first edition. The new chapters topics include child labor in the cocoa production industry, sex trafficking in the hospitality industry, LGBTQ+ intimate relationship trafficking, and an integrated theory of human trafficking utilizing criminology, migration, and feminist literatures.

The book emphasizes the multiple types of human trafficking and exploitation evident worldwide, with a particular emphasis on identity-based vulnerabilities and those otherwise marginalized in the research literature. The public discourse associated with human trafficking has led the general public to believe that human trafficking is synonymous with sex trafficking. Although this is the most identified form of human trafficking, it is not the only practice of traffickers. It has been revealed that children are illegally sold through false adoption agencies; women are bought for marriage and then forced into various forms of labor; children become involved in paramilitary organizations and are coerced into fighting as soldiers. All of these activities fall under the umbrella term of human trafficking, but are not often socially nor legally represented as such. Similarly, the role of identity-based oppression is marginalized in the research literature as well.

This edited reader reveals the complexity of human trafficking, and lays the groundwork for a shift in the global understanding and policies associated with human trafficking. It brings together experts from multi-disciplinary perspectives and backgrounds to discuss the various types of human trafficking as well as the myriad of victim identities and related vulnerabilities.

There is a set of 122 PowerPoint slides available upon adoption of this book. Click here to view a sample presentation. If you are a professor using this book for a class, please contact Beth Hall at bhall@cap-press.com to request your slides.