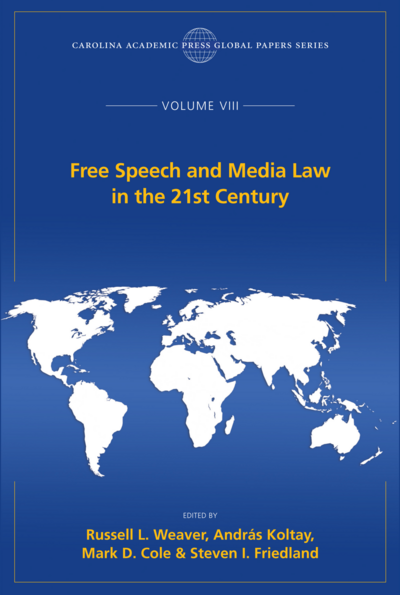 Free Speech and Media Law in the 21st Century

Modern commentators have debated the role of free speech in modern democratic societies, and have offered various justifications for according free speech a preferred position in the constitutional hierarchy. However, there has been little agreement. While some courts and commentators advance the so-called "marketplace of ideas" theory, others focus on the "democratic process" theory, the "safety valve" theory, or the "liberty/self-fulfillment" theory. A few argue in favor of all four theories. There have been similar debates regarding the role of the media in a free society. While some have argued that the press is entitled to a privileged position, because of its role as a "watchdog of democracy," others disagree, arguing that citizen free speech rights are co-extensive with media rights.

The papers published in this volume were presented in June of 2017 at the Free Speech Discussion Forum hosted at Pázmány Péter Catholic University Faculty of Law in Budapest, Hungary. The purpose of this forum was to bring together prominent free speech scholars from around the world to discuss matters of common interest. The Budapest forum was specifically focused on two topics: "The Foundations and Limits of Free Expression" and "The Media in the Twenty-First Century."