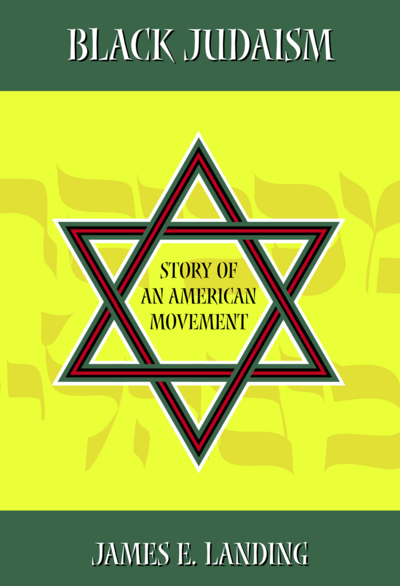 Story of an American Movement

This is the paperback version of the hardback published in 2002.

Throughout most black societies today, there are Jews who are not accepted by the worldwide community of Rabbinic Jews. They are known as Black Jews, and the movement they represent is known as Black Judaism. Originating in the post-Civil War southern states, the early leaders of this movement were motivated by oppression and racism to migrate north. They came into contact with Rabbinic Jews and the Judaism they represented, but Black Jews and Black Judaism were rejected.

Black Judaism continued to spread and reached the continent of Africa where it became an integral part of the Independent Black Church Movement and an active component of the various struggles for independence. From New York it spread to Latin America, especially the West Indies, and is known there in its most varied form as "Rastafarianism."

During the turbulent days of the Civil Rights era, an uneasy alliance developed between some Black Jews and Rabbinic Jews, but again rejection soon followed. Black Judaism has never been a large movement in numbers of adherents, but its influence far exceeds its numbers, making it recognizable, as Landing shows in this book, as one of the most important social movements in African-American history.

"There is limited existing literature on the topic and Landing's book offers a much needed analysis of this little known religious phenomenon. The work includes an extensive annotated bibliography and photographic supplement. Recommended for academic and research libraries." — Association of Jewish Libraries, September/October 2004