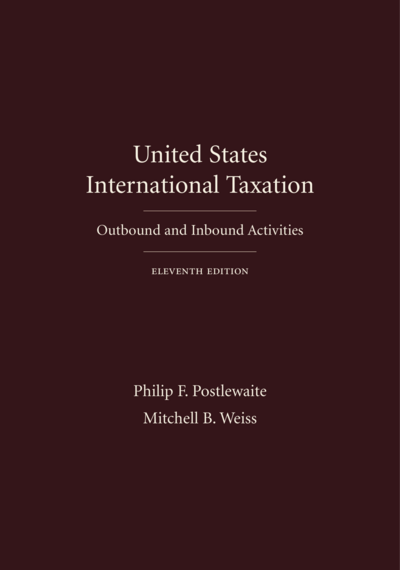 Replete with hundreds of charts and illustrations, this two-volume treatise provides an in-depth discussion and analysis of the domestic taxation of international transactions. It is uniquely organized around the great divide within the United States international taxing system, namely domestic persons' "outbound" activities outside the United States and foreign persons' "inbound" activities within the United States. The eleventh edition has been substantially revised to integrate the far-reaching statutory and regulatory changes brought about by the landmark 2017 tax legislation, popularly known as the Tax Cuts and Jobs Act of 2017.

Volume 2 addresses inbound transactions and activities, where foreign individuals and businesses work and invest within the United States. Among other topics covered, this volume discusses the foreign residency requirements, the United States taxable presence of foreign persons, the effectively connected income requirements, the branch profits taxes, the Foreign Investment in Real Property Tax Act (FIRPTA), the tax treaty qualifications and limitations, the taxing provisions of international partnerships, the limitations imposed on non-recognition inbound property transfers, and the various anti-base erosion constraints, including the base erosion and anti-abuse tax (BEAT) and the earnings stripping provisions.

The Model United States Income Tax Treaty, United States-Canada Tax Treaty, and the associated Treasury Department Technical Explanations are included in the appendices. This two-volume treatise is current through May 30, 2021, and is available only as a set.