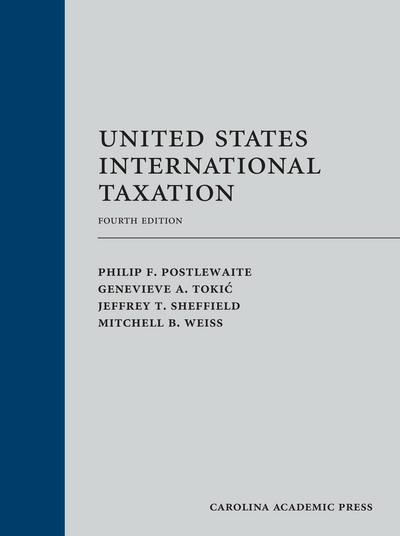 United States International Taxation embodies dual goals: to provide graduate tax students with a solid foundation in the applicable rules of a given area and to enhance their skills in reading and applying complex statutes and regulations. This fourth edition has been revised to integrate the far-reaching changes brought to the subject by the landmark legislation enacted in the Tax Cut and Jobs Act ("TCJA") in December 2017.

The text provides a streamlined approach, limited to 15 units, to the fundamental concepts of international taxation, including:

The fourth edition focuses on key concepts (i.e., outbound, inbound, and safeguard issues) that can and should reasonably be covered in a one-semester introductory course on international taxation employing the use of the problem method of instruction. An updated teacher's manual accompanies the revised student problems that integrate and address the dramatic changes of the TCJA. Finally, given their importance in the international arena, the text addresses the role of tax treaties. The problems therein involve Canadian taxpayers engaged in inbound transactions. The appendix reproduces the text of the United States–Canada Treaty as well as its Technical Explanations in order to afford the students a real-world experience.