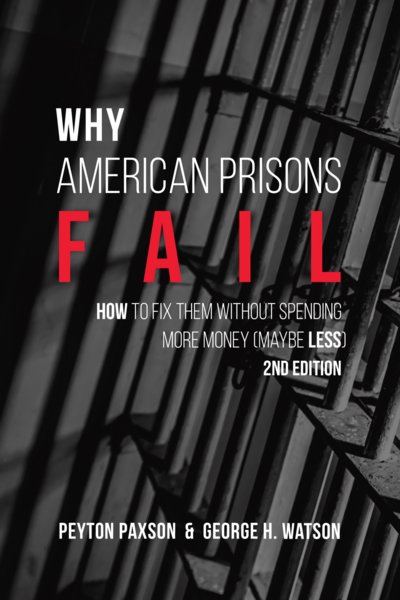 How to Fix Them without Spending More Money (Maybe Less)

InWhy American Prisons Fail: How to Fix Them without Spending More Money (Maybe Less), two former law school classmates, Peyton Paxson, a criminal justice professor, and George H. Watson, a past federal inmate and former attorney, address the issues currently facing our corrections system. They begin by describing how events in the late twentieth century caused the U.S. to have the highest incarceration rate in the world today. They go on to discuss how Watson found himself in prison and his observations of how prisons fail to do their job—to rehabilitate prisoners and prepare them for reintegration back into society.

The book provides brief surveys of the history of criminological theory and American prisons and compares U.S. penology with that of other Western democracies. The authors also examine the political and economic factors that drive today's mass incarceration phenomenon. They conclude with a discussion of existing best practices and proposed reforms to move away from expensive and unsuccessful mass incarceration toward a more effective system. Why American Prisons Fail is particularly timely, as there are rising bipartisan calls in Washington and among the states to adopt a different response to crime.

This second edition updates the first, which was written during the end of the Obama administration. The authors compare and contrast the policies of that administration and the current Trump administration, while maintaining the bipartisan nature of the discussion.

There is a set of 133 PowerPoint slides available upon adoption of this book. Click here to view a sample presentation. If you are a professor using this book for a class, please contact Beth Hall at bhall@cap-press.com to request your slides.

PRAISE FOR THE FIRST EDITION:

"Prisons are worlds unto themselves. Unless an author has worked in a prison or served time in one, an account of how and why they've become such failed institutions will lack depth and authenticity. George Watson spent time in federal prison (the absurdity of his conviction alone speaks volumes about the problems plaguing the criminal justice system). Along with co-author Peyton Paxson, he uses the experience to build a compelling and comprehensive critique of America's 'correctional'system. This is one of the best books I've seen in years on why we must rethink the way we punish people, and practical blueprint for how. Excellent for undergraduate and graduate students alike. The authors' fluid writing style, comprehensive teaching manual and Power Points are an added bonus." — Jennifer R. Wynn, LaGuardia Community College and John Jay College of Criminal Justice, author of Inside Rikers: Stories from the World's Largest Penal Colony

"…an interesting and educational perspective on the national correction system…not only an excellent primer on the political and social history of the mass incarceration movement, but also rehabilitation…professors will find a great deal of discussion material for their classes." — Lydia M. Long, Ph.D., McMurry University

"Really glad that I chose Why American Prisons Fail for my Introduction to Corrections classes. It is very timely and well written … just what I was looking for as an adjunct to the primary text I am using." — Thomas Roscoe, Ph.D., Westfield State University

"...an insightful text that details America's path toward becoming the nation with the highest incarceration rates in the world...Without doubt, Paxson's and Watson's reform proposals are important and necessary at a time when criminal justice reform is used as a buzzword across the American political spectrum."—Criminal Justice Review