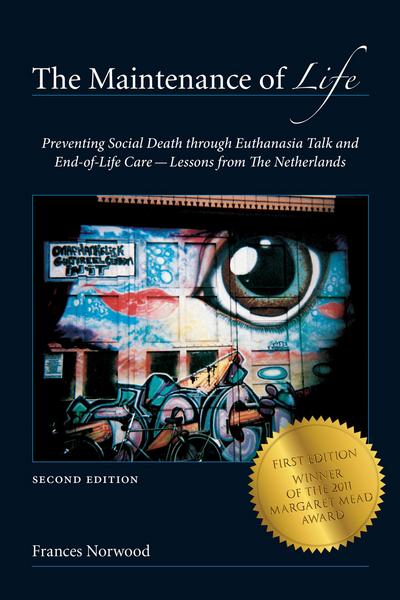 The Maintenance of Life: Preventing Social Death through Euthanasia Talk and End-of-Life Care—Lessons from The Netherlands, Second Edition

The Maintenance of Life

This second edition comes ten years after the first book. A lot has changed in the greater context of healthcare since the first edition — with the passage of the U.S. Affordable Care Act in 2010 and the assault on healthcare heralded by the election of Donald Trump in 2016. Up until the 2016 elections, assisted dying policy was on the upswing around the world with laws passing in several countries and in a number of states in the U.S. The U.S. — and the world — is in a period of social unrest and where end-of-life policy will fall is just one of the many issues that hang in the balance. What is clear is that the landscape of death and dying has changed. Today, death most often does not happen in an instant, it is more typically a long process of life mixed in with decline and social losses that eventually and sometimes many years after an initial onset of terminal or serious illness culminates in some combination of social and biological death.
The Maintenance of Life is about what has developed in one present-day society to address social death and modern dying. It is based on a 15-month qualitative study of home death in the Netherlands with general practitioners, end-of-life patients and their family members. The book develops from two study findings: (1) that euthanasia in practice is predominantly a discussion, which only rarely culminates in a euthanasia death and (2) that euthanasia talk in many ways serves a palliative function, staving off social death by providing participants with a venue for processing meaning, giving voice to suffering, and reaffirming social bonds and self-identity at the end of Dutch life.

Through the mainstream practice of euthanasia talk, space has been created within healthcare which helps people live longer as active participants engaged in Dutch social networks at the end of life. Using direct observation and in-depth interviews with patients, families and physicians, this book looks critically at Dutch euthanasia policy and broader end-of-life practices from a cultural perspective and in comparison with U.S. end-of-life practices and policies. It concludes with a discussion of what lessons the U.S. and other countries may take from the Dutch experience maintaining life at the end of life.

The author received the Margaret Mead Award for The Maintenance of Life in recognition by the Society for Applied Anthropology and the American Anthropological Association for younger scholars who interpret anthropological data and principles in ways that make them meaningful and accessible to a broadly concerned public.

The Maintenance of Life is recommended by Choice Magazine for all levels/libraries.

PRAISE FOR THE FIRST EDITION:

“The Maintenance of Life will not (and is not meant to) change readers' opinions (con or pro) about euthanasia.  Instead, it is "for anyone interested in learning more about death in another culture in order to gain some insight into death where you live" (p xxiii). As such, it presents much food for thought.” — The Journal of the American Medical Association (JAMA)


“[A] pure pleasure to read… extraordinarily relevant… We can only hope that Congress reads this book quickly, before they vote [on healthcare reform].” — Joost Visser, Medish Contact, weekly magazine for the Royal Dutch Society for the Promotion of Health (KNMG) (translated from Dutch)

“This beautifully written book, testimony to the power of ethnography, brings much needed clarity to end-of-life decision-making in the Netherlands. Frances Norwood shows convincingly how historically and culturally embedded “euthanasia talk” very often serves to enrich and reaffirm social life, and relatively rarely ends in medically assisted death. A book for everyone interested in how we die in contemporary society.” — Margaret Lock, PhD, Author of Twice Dead: Organ Transplants and the Reinvention of Death

“This book is an invaluable ethnographic account of dying in the Netherlands, where unique conditions mean that much-needed lessons can be learned by people involved in end of life care elsewhere. The author provides a sensitive and detailed account of the integration of euthanasia and talk about euthanasia within a palliative approach. The detailed account of individual cases complements existing statistical studies of the prevalence of particular end-of-life decisions, providing the contextual information that such studies are unable to deliver.” — Clive Seale, PhD, Author of Constructing Death: The Sociology of Dying and Bereavement

“As a native of the 'tribe' that Frances Norwood describes, I am impressed by the subtleness of her observations. Euthanasia has proved a bone of moral contention and baffling misunderstanding. Norwood succeeds in capturing the natives' point of view in a manner that only an outsider can do. As an anthropologist I compliment her for the originality of her interpretation of 'euthanasia talk' as a way to help patients maintain personhood in the face of decline and to provide family members a voice that honors their central place in the life of the dying person.” — Sjaak van der Geest, PhD, Medical Anthropology, University of Amsterdam

“Frances Norwood's The Maintenance of Life exposes an interesting irony in the discourse on euthanasia. While legal in the Netherlands, only a small percentage of people seek assisted death. Euthanasia, it seems, has sparked an unofficial movement that allows for a natural life span where people value meaning-making over a quick escape from suffering; where society hears the cries of the suffering and supports them; and where the self-worth of the individual remains intact inspite of illness and infirmaries.” — Christina M. Puchalski, MD, Executive Director of GWish and author of A Time for Listening and Caring: Spirituality and the Care of the Chronically Ill and Dying

“Everyone who thinks about end-of-life issues should read The Maintenance of Life. It is a beautifully written book on an important topic. Anthropologist Frances Norwood spent 15 months in the Netherlands, learning first-hand how the dying, their families, and their physicians confronted this difficult subject. She tells this powerful and touching story with both a close eye for personal detail and a researcher's care. After the depressing debate in the U.S. over 'death panels,' it is especially important to hear what Norwood has to say: While the Netherlands has allowed euthansia for decades, few there use it. Instead, the simple fact that those with terminal disease have an opportunity to express their wishes makes them less likely to end their lives. It is a powerful lesson for us all.” — Howard Gleckman, researcher with Urban Institute and author of Caring for Our Parents: Inspiring Stories of Families Seeking New Solutions to America's Most Urgent Health Crisis

“Norwood successfully deepens and clarifies the experience of doctors, patients, and their families with help from philosophers, sociologists, and historians.” — Rien Janssens, Medische Antropologie

“The idea that 'euthanasia talk' includes far more than 'the immediate, the obvious (planning for death)...[but also serves] to affirm social bonds and social life at end of Dutch life' is a point that seems to a 'native' both right and important. It corresponds to the Dutch idea that what they have done is to make euthanasia 'bespreekbaar' [discussable], not only in public discourse but also as part of the social process of dying.” — John Griffiths, PhD, Sociology of Law at University of Groningen and co-author of Euthanasia and Law in Europe

“It is indeed a thorough, penetrating and sensitive analysis of Dutch patients requesting euthanasia..." — Dying with Dignity Victoria

“[A] well-written, sensitive, and timely study of euthanasia and assisted suicide in the Netherlands… Summing Up: Recommended. All levels/libraries.” — CHOICE Magazine