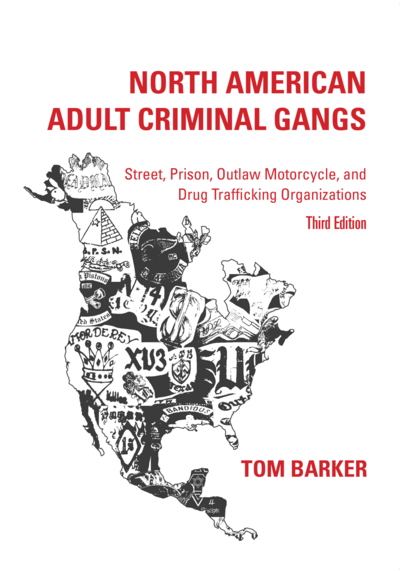 This book examines Adult Organized Criminal Gangs (AOCGs), a major North American crime problem responsible for the drug-trafficking epidemic plaguing Mexico, the United States and Canada. In addition, North American AOCGs are involved in a wide range of other trafficking and organized crime enterprises. NOTE: The third edition title has changed slightly to add "Adult" toNorth American Criminal Gangs to distinguish the book from those that focus on youth gangs and delinquency.

Early chapters define different types of gangs—street-based, prison-based and outlaw motorcycle gangs—and illustrate the specific gangs (MS-13, Hells Angels, Bloods and Crips, etc.), giving many examples of gang activities in the news. Also explored are how different gangs sometimes work together, illustrated in events like Operation Joker's Wild, which shed a light on cooperation between the Florencia 13 street gang and the Mexican Mafia prison gang and led to drug-trafficking and murder charges. Later chapters look more closely at the drug-trafficking business models of various gangs, and how this leads to RICO (Racketeer Influenced and Corrupt Organizations Act) charges and convictions.

Many recent examples of gang activity have been added throughout the third edition to update the material, such as that of the Bandidos national president who was convicted on racketeering and murder charges in San Antonio in 2018.