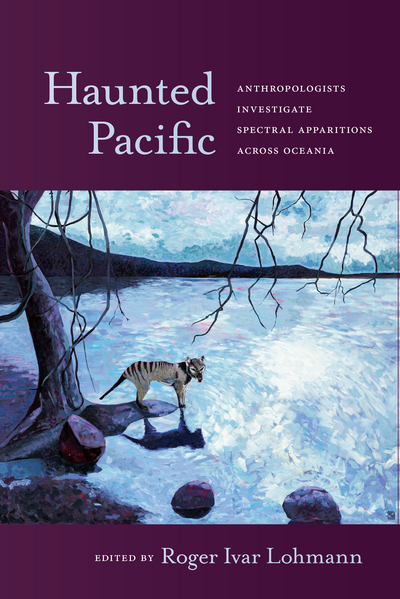 The Pacific Islands are hauntingly beautiful—and just plain haunted, according to the peoples and experiences vividly described in this book by eight cultural anthropologists. The chapters cover topics as diverse as ancestral presences in familiar spaces, the transfer of hauntings to new islands, an ethnographer treated as a returning dead person, convergence of multiple haunting traditions, esoteric lands "sensed" on the horizon, causes and accounts of ghost sightings in particular places, haunting in novels about anthropological encounters, and spiritual manifestations in rainforest seances. The examples show that different cultures posit distinctive haunting presences, ways of recognizing them, and evaluations of what they are. Building on this foundation, the introduction presents a scientific theory of haunting. All cases of haunting involve the sensed presence of a mind—or its thought, feeling, or creativity—in places and times where it does not rightly belong. Intertwined biological and cultural mechanisms of perception and imagination bias interpretation of our experiences. Hauntings manifest when our surroundings trigger associations built from past experiences, leading people to take internally generated experiences of presences for features of the landscape. These convictions make haunting experiences not just moving or frightening, but the basis of life and death decisions, as the authors of Haunted Pacific explore in detail.

"Haunted Pacific masterfully couples contemporary ethnography of Oceania, especially of thought and action concerning other-than-human persons, with cognitive science of religion. It thus succeeds in at least two central anthropological endeavors: to depict particulars of belief and behavior across a culture area, and to reveal them as variants of human universals."—Stewart Elliott Guthrie, Professor Emeritus of Anthropology, Fordham University, author of Faces in the Clouds: A New Theory of Religion (1993, Oxford University Press)

"Haunted Pacific is full of good stories of ghosts and spirits and other 'non-corporal' beings. It might be said to attempt the ethnography of other realms—the ethnography of the cultural imaginary, which in the Pacific is also a geographic imaginary inscribed on the physical world and its more remarkable features, features that routinely evoke local stories of such beings. Hauntings are ubiquitous in Pacific island-scapes, the book shows: they might be said to map the 'spiritual landscape' of island domains. Useful for those interested in the cross-cultural study of contemporary and ancient and changing religions, the book renders accounts of Pacific places partially incorporated in Western ways of making meaning and partially not, and of ambiguous entities that flicker in and out of view on those edges where incorporation is in process and still showing the limits of Western ways. The book further suggests the usefulness of studying ambiguous aspects of cultural worlds—those aspects potentially most challenging to anthropologists own views and ways of making meaning. The book is also potentially useful for teaching undergraduates, who, like all of us, are drawn to haunting stories and who most need their own meaning systems challenged."—Jeannette Mageo, Professor of Anthropology, Washington State University, and co-editor of Spirits in Culture, History, and Mind (1996, Routledge)

"This is a fascinating book, ethnographically rich and detailed. The Pacific has long stood out as a place of the supernatural. We learn about ghosts, gods, spirits and magic and how anthropologists think about how to make sense of them. Well worth reading and assigning."—Tanya Marie Luhrmann, Howard H. and Jessie T. Watkins University Professor of Anthropology, Stanford University, and author of When God Talks Back: Understanding the American Evangelical Relationship with God (2012, Alfred A. Knopf)

"This terrific volume is a veritable compendium of ghosts, spirits, and witches as well as other-than-human spectres haunting peoples and places across the Pacific. Via formidable ethnography the contributors contour regional similarities and differences, complemented further by a gratifying variety of analytical angles. Spooky good stuff!"—Yasmine Musharbash, Senior Lecturer, Australian National University, and co-editor of Monster Anthropology in Australasia and Beyond (2014, Palgrave Macmillan)