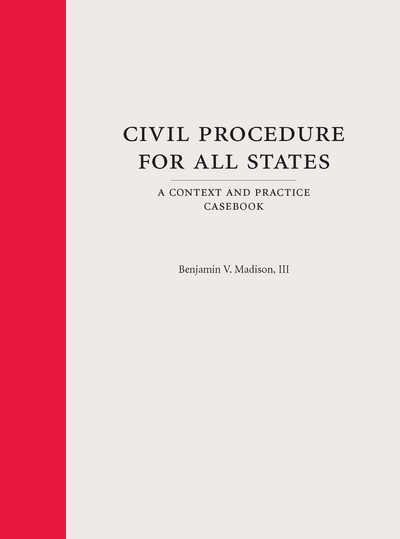 Civil Procedure for All States (Paperback)

This is the 2018 paperback printing of the casebook published in 2010.

Civil Procedure for All States is unique in scope. No other casebook or textbook has sought to take the procedural doctrines that arise in the stages of a civil action and address them for each state. Each chapter describes the majority approach to a procedural doctrine, the significant minority approach, and those states that are peculiar in their approach. By taking this comprehensive approach, the book has been able to identify the common decision-making steps that a lawyer must take in handling any case, in any state. Thus, the book has the student-as-associate thinking through the questions that a seasoned litigator would consider at each stage. The student then applies the law of that student's jurisdiction to the problems that arise at each stage of a case. After resolving questions that sharpen the student's ability to deal with a given procedural issue, each chapter incorporates numerous questions that force the student to wrestle with matters of professionalism and ethics.

This book is designed to follow the new Context and Practice Series. Books in the series will feature elements that recent studies of legal pedagogy (Best Practices in Legal Education and the Carnegie Foundation's Educating Lawyers) recommend as essential to improving law school teaching. First, the books will emphasize heavily the practical application of the legal doctrines addressed in each book. Students will be placed in the roles of practitioners handling simulated cases. They will apply the legal doctrines that they learn in the book in exercises that require them to perform tasks that lawyers actually perform. As the studies mentioned above underscore, teaching in this manner will serve more than one purpose. It will not only better prepare students for practice. It will show students the significance of the material they are learning by demonstrating the reality that they will be using these doctrines. Second, the C & P Series will also accomplish another primary goal of the Best Practices and Educating Lawyers studies. That goal is to engage students in professional identity formation so that, when they begin practicing, they will have a better idea of the kind of lawyers they want to be.

In April 2012, the Institute for the Advancement of the American Legal System recognized Professor Madison as an Educating Tomorrow's Lawyers fellow and his course as one that advances reform in legal education.

"Professor Ben Madison is a rising teacher and scholar of Civil Procedure. His sophisticated and thorough casebook, Civil Procedure for All States, contains subjects students need to know but may not learn elsewhere like the in-depth examinations of the statute of limitations, disability and capacity to sue. Carefully crafted problems develop a student's thought process to develop actual solutions. One important theme and new direction is an ethical dimension named professional-identity focus. This lucidly written and well designed casebook will introduce law students to both professionalism and procedure." — Doug Rendleman, Washington and Lee University School of Law

"I knew I would be practicing in Ohio. When I saw Professor Madison had a casebook designed to teach procedure applicable to the state in which one intended to practice, I wondered how that could be done. Having now completed the course, I can say without qualification that this course did more to help me get ready to practice law than any other. First, the book tied together a great deal of what I had learned in law school, but had not connected. The method of introducing a Master Case (a complex civil case) and going through the decision-making and steps, in the order a lawyer would do it, is what helped me see the big picture. Second, the book offers not only traditional cases, but many practice problems which helped me to learn to apply the doctrines of Ohio procedure to a set of facts. The end of each chapter then reinforced the topics by including an assignment that a lawyer would actually perform—e.g., drafting a complaint, developing a discovery plan. Third, the book had something that I have never seen in courses other than Professional Responsibility. Every chapter wove in several questions that brought home to me the challenging ethical questions I will face in practice. I now have a much better sense of what limits I will set, and the professional identity to which I will aspire. In short, I received a lot more out of this course than I had ever expected." — Robert Rice, 2010 graduate, Regent University Law School, on taking the Ohio Bar Exam