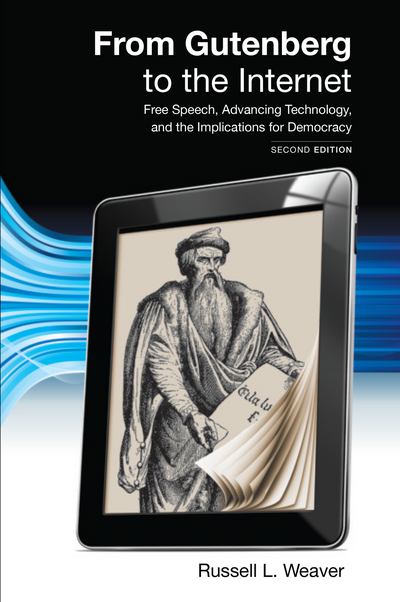 From Gutenberg to the Internet

Free Speech, Advancing Technology, and the Implications for Democracy

This new edition explores how then-candidate Donald Trump used the Internet to help fuel his 2016 presidential campaign and also examines such phenomena as "fake news," Russian interference in the 2016 election, and some of the other problems that the Internet has spawned.

"Weaver's book is particularly fascinating in charting the progress of communication from the cave-painting of prehistoric times to the social media interaction of the modern day. In his characteristically accessible style, he provides passages that are rich and breath-taking in the range and depth of rigorous scholarship, whilst at the same time deeply enjoyable, demonstrating both a love of the subject and a tremendous knowledge of its history."—Dr. Paul Wragg, Communications Law, Vol. 24, No. 3, 2019

"From personal experience I can vouch for it being an excellent addition to any media lawyer's collection. Weaver has managed to strike a very difficult balance: this book is accessible to a wide range of audiences, yet it provides a depth of analysis and insight that will make it invaluable to media law and communication scholars. It will also be of interest to practising media lawyers and those involved in communication policy
and media regulation."
— Dr. Peter Coe, Entertainment Law Review 2020, 31(5), 185-186