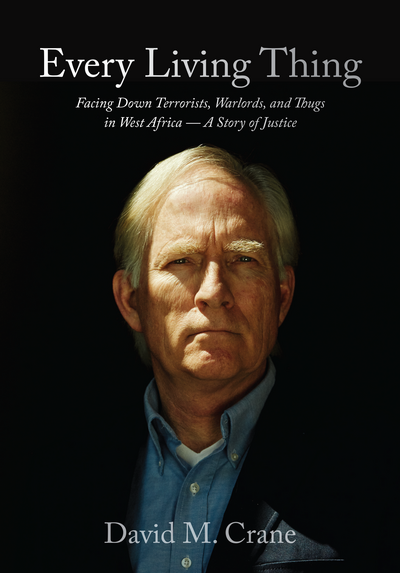 Facing Down Terrorists, Warlords, and Thugs in West Africa—A Story of Justice

From 2001 until 2005, David M. Crane, the first American since Justice Robert Jackson at Nuremberg in 1945 to be named the Chief Prosecutor of an international war crimes tribunal and one of the most recognizable international criminal lawyers in the world, worked with a team of intrepid investigators to bring down the most powerful warlords in West Africa. Against all odds and at great personal sacrifice—forced to live across the world from loved ones and under constant threat from those who would have happily murdered him for his efforts—Crane worked tirelessly to unravel a complicated international legal puzzle to become the only person in the modern era to take down a sitting head of state for war crimes and crimes against humanity.

Set in the steaming jungles of the ravaged West African country Sierra Leone, Every Living Thing: Facing Down Terrorists, Warlords, and Thugs in West Africa—A Story of Justice shows how multiple countries were devastated by an international criminal enterprise led by Presidents Muammar Gadhafi of Libya, Charles Taylor of Liberia, and Blasé Compare of Burkina Faso, with an assist from a vast network of terrorists, including Al Qaeda, vying for the control of diamonds.

Following the creation of Special Court for Sierra Leone in 2002, a small band of lawyers, investigators, and paralegals changed the face of international criminal law with their innovative plan to effectively and efficiently deliver justice for the tens of thousands of victims, most of them women and children, in the process bringing down warlord-turned-president Charles Taylor of Liberia, the most wanted man in the world.

Drawn from the author's personal journals, this book is the first ever detailed account written by a chief prosecutor of an international war crimes tribunal. Every Living Thing is the first such work to show how the rule of law is more powerful than the rule of the gun—and provides the playbook for accounting for similar horrors elsewhere.

"All too often, the profiteers of war and mayhem simply get away with it. Countering that narrative, David Crane has an inspiring story to tell. David and his small band of brilliant lawyers, against all odds, brought to justice Liberia's Charles Taylor for masterminding the macabre, greed-driven 'blood diamonds' war in Sierra Leone. It was a dramatic moment in history, one that remains a critical precedent for international law and accountability, and David was at its epicenter."—John Prendergast, Founder and President of the ENOUGH! Project, Washington, DC

"The personal memoirs of David Crane, first chief prosecutor of the Special Court for Sierra Leone, will provide a crucial resource for anyone interested in the history of modern international criminal justice. The Sierra Leone court was the first hybrid or mixed tribunal and its success paved the way for others that followed. David Crane's vision and leadership were essential ingredients that made that success a reality. The importance of this book cannot be doubted."—Richard Goldstone, Founding Chief Prosecutor of the International Criminal Tribunal for the former Yugoslavia; Commissioner of the South African Truth and Reconciliation Commission; Justice, South African Supreme Court

"In Sierra Leone, David Crane masterfully built up a fully-fledged court, investigating and prosecuting some of the worst cases of international crimes and many of the most notorious war criminals of our era. He brought with him a deep commitment to justice, and genuine empathy for a country and people who had endured unbearable atrocities. The memoirs of this admirable and learned public servant will undoubtedly convey important lessons on how—and why—we must strive to deliver justice for all victims, even in the most challenging circumstances."—Zeid Ra'ad Al Hussein, United Nations High Commissioner for Human Rights

"The success of the Special Court for Sierra Leone is a powerful story that must be documented for history's sake. Public policy experts, historians, and all citizens would benefit from getting a first-hand account of how the Court was established and what it took to get a brutal warlord behind bars. Seeking accountability for atrocities and war crimes is an extremely relevant issue today and few can speak to that issue with as much credibility and authority as David Crane."—Representative Ed Royce, Chairman, Committee on Foreign Affairs, U.S. Congress

"The SCSL sent out a clear message that those who commit serious crimes against their people would be held accountable, irrespective of their political power or official position. The Court created groundbreaking jurisprudence: it determined that the abduction and sexual enslavement of women and girls constituted the crime against humanity of 'forced marriage' and it also convicted Charles Taylor, former President of Liberia, of planning and aiding and abetting the commission of crimes against humanity in neighboring Sierra Leone. This is an unprecedented, historic conviction of the first former head of State for serious international crimes while in office. Ultimately, the Court served to ensure peace, justice, and reconciliation in Sierra Leone so that the people of the country could advance towards rebuilding their nation. None of this would have happened, and with such speed, had it not been for the drive, expertise, and commitment of David Crane and his team, who surmounted great obstacles to start a justice system where none existed, and successfully conducted investigations and prosecutions, and secured arrests, bringing to justice suspects at the highest levels of responsibility. This book is an invaluable tribute to the pursuit of justice for victims of crimes against humanity."—Justice Navi Pilay, Former Judge for the International Criminal Court, Vice-President and Appellate Judge for the International Criminal Tribunal for Rwanda