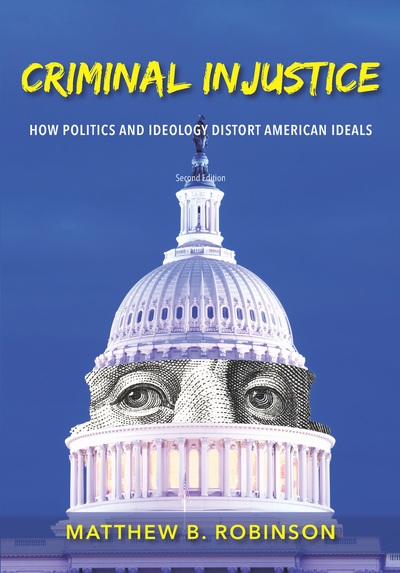 by Matthew B. Robinson

Criminal Injustice examines the influence of politics and ideology on criminal justice practice. Politics refers to governing decisions about how to deal with social problems and distribute resources in society, and ideology means the beliefs and values that guide political decisions and underlie our societal institutions. The book clearly illustrates that criminal justice practice is directly and meaningfully impacted by politics and ideology, beginning with law-making.

The main argument of Criminal Injustice is that politics and ideology distort America’s ideal goals of crime control and due process, oftentimes resulting in ineffective and unfair criminal justice policies. That is, politics and ideology distort the ideals of Americans found in the Declaration of Independence and the U.S. Constitution. In the book, the author demonstrates how this is true, and he argues that the main problem with criminal justice practice is that it does not target the most harmful acts in America; instead it focuses heavily on a handful of harmful acts committed by certain groups of people under certain circumstances. This occurs because of who makes the law and who pays for it: these people create laws and policies that benefit them and their financial backers rather than “the people” more generally. Further, media coverage of crime and criminal justice reinforces myths of crime (including who is dangerous and who is not), which helps maintain the focus of criminal justice agencies on street crime rather than on other forms of harmful behavior that actually cause far more damage to society.