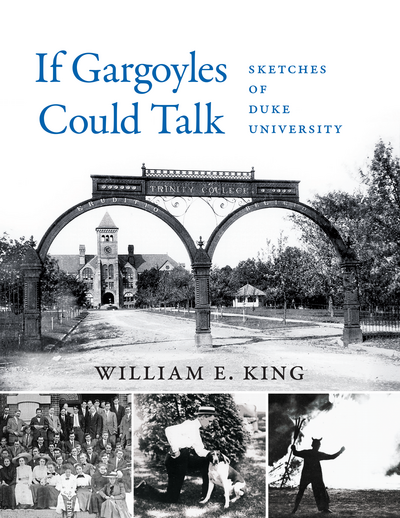 If Gargoyles Could Talk (Paperback): Sketches of Duke University

If Gargoyles Could Talk (Paperback)

This is the 2019 paperback printing of the hardback book published in 1997.

This comprehensive text covers events and topics significant to the history of Duke University and to the history of higher education. Topics covered include Duke family and campus individuals, buildings and construction, educational programs and professional schools, athletics, and other topics of general interest.

The subjects are colorful and varied: a "forgotten" president; a visit by Booker T. Washington (his first to a white southern college); the origin of the Blue Devil mascot; Russian Studies at Duke; the stone setters who built the campus; student dance bands in the 1930s; the employment of German Jewish émigrés who fled Nazi Germany; the campus controversy over tobacco through the years; Richard M. Nixon; the vote by the trustees to divest of investments in South Africa; and Julian F. Abele, the African American chief designer of the firm that designed the original Georgian and Gothic University campuses.

The aim of the book is to contribute new historical information discovered in the university archives and to emphasize that the modern research university is built upon its predecessor institution, Trinity College. If Gargoyles Could Talk will appeal not only to alumni and friends of Duke University but also to anyone interested in the history of the region or higher education.