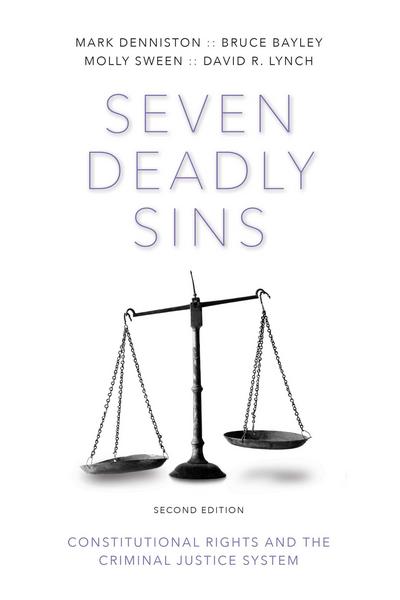 This textbook brings a fresh approach to the study of constitutional criminal rights in the context of the American criminal justice system. It is intentionally written at a level suitable for an undergraduate. Seven Deadly Sins presents seven core constitutional virtues, introduced to the reader via their mirror opposites, which the authors call the “seven deadly constitutional sins” of the criminal justice system. These negative attributes or “sins” are: intolerance, subterfuge, intrusiveness, craftiness, favoritism, cruelty, and subservience to authority. Some of these negative attributes are housed entirely in one amendment to the constitution (e.g., cruelty) while others span several areas of the Bill of Rights (e.g., subservience to authority).

Each negative trait is presented in two companion chapters. The first of the two chapters introduces the negative trait (e.g., “intolerance”) and establishes its constitutional place via a presentation of various appellate law decisions written in language suitable for an undergraduate student. The second, or companion, chapter then presents real world, non-legal “stories” from the field in the areas of policing and corrections that illustrate the trait using a more “hands-on” approach.

It is this combination of true stories from the field coupled with conceptualizing constitutional rights in terms of their mirror opposites (including the grouping of several amendments at once when necessary) that makes this book unique and fresh.

"It is difficult, if not impossible, to find a Consitutional law textbook for undergraduates, especially if the Constitutional law class is relegated to one semester. This text fills a critical need in that it is designed specifically for that purpose." — S.E. Blankenship, CHOICE 54(7)

"An accessible text for reading and classwork. What is there not to like about this textbook?"— Corrections Today