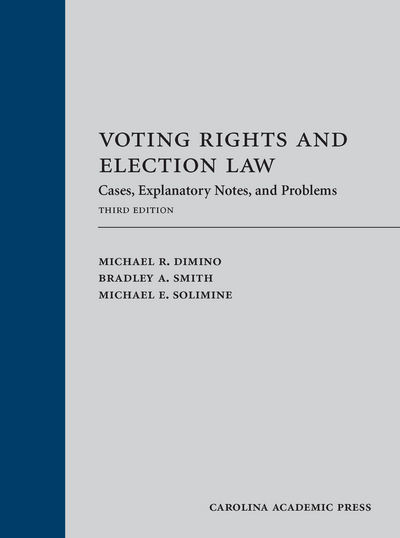 Voting Rights and Election Law is a teachable, yet sophisticated, casebook that takes readers through the law of the political process, from the right to vote through the tabulation (and re-tabulation) of votes. Along the way, the book explores and explains the law of districting (including gerrymandering and the one-person, one-vote doctrine); the Voting Rights Act; ballot access and ballot design; free-speech rights of candidates, parties, and ordinary citizens; campaign finance; and the election administration.

This book presents the law of politics in a thorough but understandable way that approaches election law primarily as law rather than as an exercise in political theory. Narrative introductions and notes clearly set forth and explain the law, and cases are edited to allow students to appreciate judicial reasoning by reading the courts' own words. Compared to other casebooks in the field, Voting Rights and Election Law emphasizes the text of leading court opinions rather than commentary and competing political theories about elections and democracy. Students are, however, encouraged through notes and questions to examine and to question the empirical assumptions and theoretical premises behind the opinions, paying particular attention to the proper role for the courts in policing politics. Frequent problems give students and instructors an opportunity to examine how the principles of election law should be applied to realistic situations—reinforcing that election law is not merely a subject of historical or theoretical interest but one that shapes political outcomes year after year.

The third edition is the product of a comprehensive review, update, and streamlining of the second. The third edition presents more material more efficiently, and as a result the third edition is both more thorough in its coverage and clearer in its explanations, while being slightly shorter than the second edition. The book's organization has been rethought and adjusted to make the presentation more effective. The materials on the political-question doctrine have been revised to account for the increased attention that has been given to partisan gerrymanding and to the use of independent districting commissions. Material on congressional power to enact the original Voting Rights Act of 1965 has been moved from Chapter 1 to Chapter 3, where it joins the (slimmed-down) coverage of preclearance, which has declined in significance after Shelby County v. Holder.

The coverage of third parties and ballot access now joins the term-limits material to form a new Chapter 6 that fully considers states' power to design, and to control access to, the ballot. The examination of the protection for anonymous speech has been combined with the materials on campaign-finance disclosure rules to form a new Chapter 9 that comprehensively considers the tradeoffs between disclosure and anonymity. The coverage of election administration has been thoroughly redesigned to cover all manner of election-day rules in a single chapter that includes examination of legal questions that have arisen as states have adjusted their election laws to account for the COVID-19 pandemic.

This new structure also allows the book to devote attention to the electoral college and to other federal rules that affect the casting and counting of votes, even as elections are administered by state and local officials.