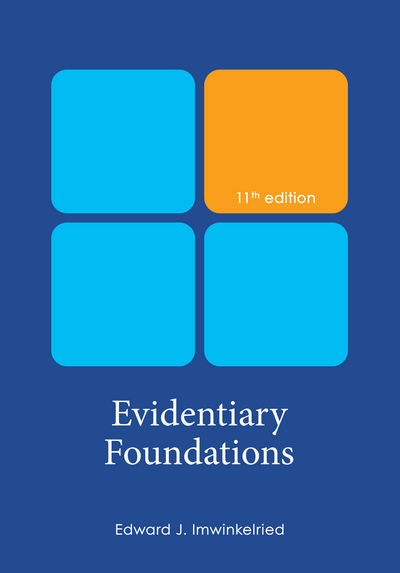 Edward Imwinkelried received the 2020 John Henry Wigmore Award for Lifetime Achievement. The award is gifted annually to the top evidence scholar of the year by the Evidence Law Section of the American Association of Law Schools.

Covering all major evidentiary doctrines, the text provides a blueprint for introduction of evidence at trial. It enables the student to convert a sentence in the Federal Rules of Evidence into a line of questioning to be used at trial. A useful companion to a coursebook in Evidence or Trial Practice, Evidentiary Foundations enables the student to picture the manner in which the rules of evidence operate in court.

After a brief narrative discussion, the book dissects each major evidentiary doctrine into a list of foundational elements. The book then sets out an illustrative foundation, establishing all the predicate elements. This foundation gives the student a more concrete understanding of the evidence rule to which the foundation relates. The eleventh edition includes a new subsection on the authentication of printouts of records maintained on a blockchain, new coverage on the doctrine of objective chances, and a discussion of the 2019 amendment to Rule 807 (residual hearsay exception).