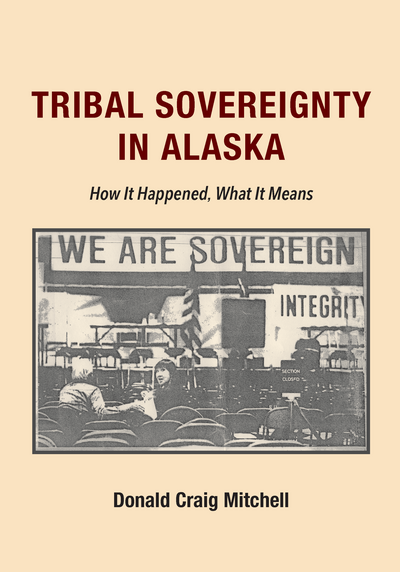 How It Happened, What It Means

Tribal Sovereignty in Alaska is the first comprehensive history of the Alaska Native tribal sovereignty movement. In 1932, Secretary of the Interior Ray Lyman Wilbur explained that "the United States has had no treaty relations with any of the aborigines of Alaska nor have they been recognized as the independent tribes with a government of their own. The individual native has always and everywhere in Alaska been subject to the white man's law, both Federal and territorial, civil and criminal."

As a continuation of that policy, in 1971 when Congress settled Alaska Native land claims by enacting the Alaska Native Claims Settlement Act, at the request of Native leaders, it required Alaska Natives to incorporate business corporations under the laws of the State of Alaska that then were conveyed land in fee title. But today the Secretary of the Interior and those same Native leaders are adamant that there are more than two hundred federally-recognized tribes in Alaska whose Alaska Native members are "sovereign" and whose governing bodies possess "inherent" governmental authority. Tribal Sovereignty in Alaska tells the story of that dramatic reversal of federal Indian policy in exhaustively researched detail.

"Tribal Sovereignty in Alaskatells a not-before-told story of which every Alaskan who is interested in Alaska legal and political history should be aware. It as a valuable commentary on important events that have occurred during a critical time for our state. Donald Craig Mitchell, a former vice president and general counsel of the Alaska Federation of Natives, is a perceptive and deeply knowledgeable analyst who participated in many of the eventsTribal Sovereignty in Alaskadescribes. He is uniquely qualified to provide a perspective that in recent years has been missing in discussions about the future of Alaska as the multi-ethnic society Congress envisioned fifty years ago when it enacted the Alaska Native Claims Settlement Act."
—Steve Cowper, Governor of Alaska 1986–1990

"In Tribal Sovereignty in Alaska, Donald Craig Mitchell's careful attention to detail and extraordinary use of primary source material bring the reader an authoritative and comprehensive account of the people, events, and institutions involved in creating the post-Alaska Native Claims Settlement Act controversy over the political status of Alaska Natives. Tribal Sovereignty in Alaska stands above and apart in the genre for its intellectual honesty and respect for the Constitution and the rule of law. It should be a primary reference for every lawmaker, judge, and historian who deals in federal and state relations with Alaska Natives, and for anyone who cares about the future of the nation's largest state and the well-being of those who live there."
—Christopher N. Fluhr, Former Staff Director, Subcommittee on Indian & Alaska Native Affairs, U.S. House of Representatives

"Assiduously researched and forcefully written, Tribal Sovereignty in Alaska documents the rise of the tribal sovereignty movement, examining fully the role of the Native American Rights Fund and other organizations and participants in consequential events. Essential and necessary reading for scholars, students, and general readers who are interested in Alaska history, this book will be of inestimable value for historians who seek to understand the context of events that gave rise to a political movement that has transformed federal Indian policy in Alaska."
—Steve Haycox, Distinguished Professor Emeritus, University of Alaska Anchorage