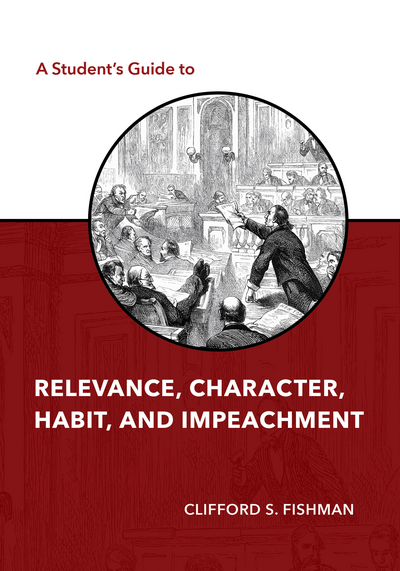 A Student's Guide to Relevance, Character, Habit, and Impeachment

Relevance is the basic concept of evidence law. Professor Fishman, who taught evidence for 41 years at Catholic University of America Law School, covers the entire subject—including conditional relevance, inferences, direct and circumstantial evidence, and order of proof—in all its applications, particularly character, "other acts" evidence, and habit. The book then covers every aspect of impeaching and rehabilitating a witness's testimony: perception; memory; narration; prior consistent or inconsistent statements; and potential bias or motive to lie. In other words, this book covers Rules 104–106, 401–415, 607–613, and 801(d)(1) of the Federal Rules of Evidence.

When an offer of evidence implicates several of these rules, Professor Fishman explains how to identify the rules (and sub-rules and "unwritten rules") that need to be considered and those which need not be; the procedural and tactical trial context in which these issues arise; and how to figure out what your professor is looking for in class and on exams.

Each chapter contains numerous essay and multiple-choice questions and answers applying the rules. In addition, he reveals the evidentiary "relevance" of (a) animals large and small; (b) cultural icons, including Shakespeare, Lin-Manuel Miranda, Blake Shelton, and Linus van Pelt; and (c) major historical figures, such as Eleanor Roosevelt, Confucius, Oliver Wendell Holmes, and Howie Kendrick.