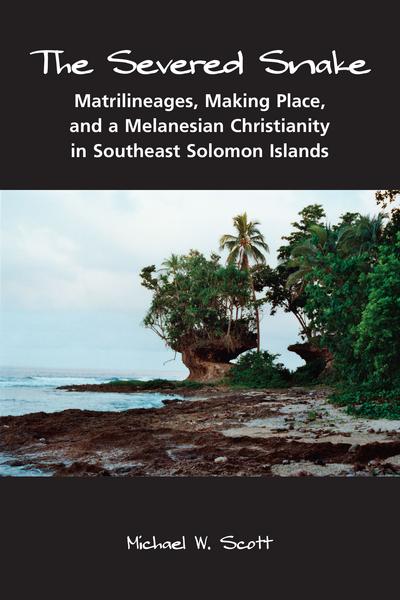 Examining the secretive dynamics of competing land claims among the Arosi of the island of Makira (Solomon Islands), Michael W. Scott demonstrates the explanatory power of ethnographic attention to the nexus between practice and indigenous theories of being.

His focus on the ways in which Arosi understand their matrilineages to be the bearers of discrete categorical essences exclusively emplaced in ancestral territories forms the basis for a timely and accessible rethink of current anthropological representations of Melanesian sociality and opens up new lines of inquiry into the transformative relationships among gendered metaphors of descent, processes of place making, and the indigenization of Christianity.

Informed by original historical research and newly documented variants of regionally important mythic traditions, The Severed Snake is a work of multidisciplinary scope that proposes critical and methodological shifts relevant to historians, development professionals, folklorists, and scholars of religion as well as anthropologists.

"Michael Scott's empirically rich study of the ontological foundations of social action combines the best aspects of classic ethnography and contemporary social theory. His attention to detail registers a keen sensitivity to local concerns and their historical specificity at the same time that his conceptual sophistication places those concerns in a broad comparative perspective. This book is a vindication of careful fieldwork's unparalleled ability to illuminate the great moral and metaphysical questions." — Webb Keane, Professor of Anthropology, University of Michigan

"I know of no other book on a Melanesian culture that probes as deeply into the question of land and identity. Michael Scott's book is thoroughly researched, historically aware, sensitive on religion, and always convincing." — Garry Trompf, Professor of Studies in Religion, University of Sydney

"[This book] will be very useful for all academics and tertiary students who seek to understand and do intelligent work among coastal and smaller island cultures in Melanesia… In this he has skilfully combined the disciplines of anthropology, studies in religion, mission history, and missiology." — Anthropos

"This book about Arosi on the island of Makira is welcome on several fronts… Scott presents engaging arguments about the interplay of Melanesian ontologies, place, and practice, and he also makes a valuable contribution to the burgeoning study of indigenous Christianities… Scott does an admirable job of disentangling [the Arosi ideological skein]. His study will greatly interest anthropologists and historians of Melanesia and beyond." — The Journal of the Royal Anthropological Institute of Great Britain and Ireland

"The book is an important contribution to Melanesian studies and will quickly enter the canon of mandatory reading for anyone working in Solomon Islands… a sophisticated and well researched study that has much to offer anyone concerned to understand indigenous modes of thinking (and being) in the world today" — Geoffrey White, Oceania, Volume 78, Number 3, November 2008

"[A] fascinating account of social change. In addition to Melanesianists, this book will be of interest to anthropologists working on issues of personhood, social change, and global Christianity." — Courtney J. Handman, Anthropological Forum, University of Chicago

"This is a major ethnography, whose scope, originality and sophistication combine to set new directions for the comparative study of the societies of Melanesia… This book is indeed a significant contribution to Melanesian ethnography, but it is more than that. It is a major contribution to the comparative understanding of Melanesia within an Austronesian-speaking world." — James J. Fox, The Asia Pacific Journal of Anthropology, The Australian National University

"The ethnography's main contribution is carefully to detail Arosi conceptions of place and identity that are broadly shared across Melanesia… Scott's analysis helps clarify why uneasy problems of land and identity in Melanesia continue to simmer." — The Australian Journal of Anthropology

"[T]he book offers a great deal of interest to scholars interested in social change in rural societies, especially where traditional land tenure and resource ownership are in play. It would also find a place in graduate and advanced undergraduate courses on the anthropology of social change." — Ryan Schram, American Ethnologist, University of California, San Diego

"This book offers the reader an excellent, and highly readable, analysis of the Arosi's understandings of land tenure and Christianity. It offers some very interesting, often critical, insights into current anthropological thinkings on Melanesian ontology and social change… The result is a subtle piece of ethnography… [I]mpressive contribution to the anthropology of Christianity, cosmology, and land tenure systems." — Michael Wood, Journal of Anthropological Research

"The Severed Snake is a work of significance for anthropologists, historians of religion, missiologists, and students of folklore." — Mary N. MacDonald, Religious Studies Review