The 2006 Supplement to Bankruptcy Problems, Cases, and Materials thoroughly covers the impact of the 2005 amendments to the Bankruptcy Code that go into effect October 17, 2005. For the first time since 1898, an individual consumer can be barred from filing in Chapter 7 by a statutory formula based largely on the consumer's income. The effect of this change for consumers is discussed in detail. The less extensive, although significant, changes made for business bankruptcies under Chapter 11 are also presented.

In addition, the Bankruptcy Code's new Chapter 15, which governs the manner and extent of United States bankruptcy courts' involvement in international bankruptcies, is covered. Besides addressing the changes in the Bankruptcy law resulting from the 2005 amendments, the Supplement includes several new cases and materials. The Supplement is a valuable adjunct to keep the student updated as a result of the watershed changes in bankruptcy practice now in effect. 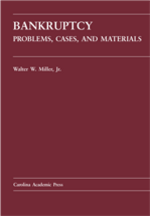