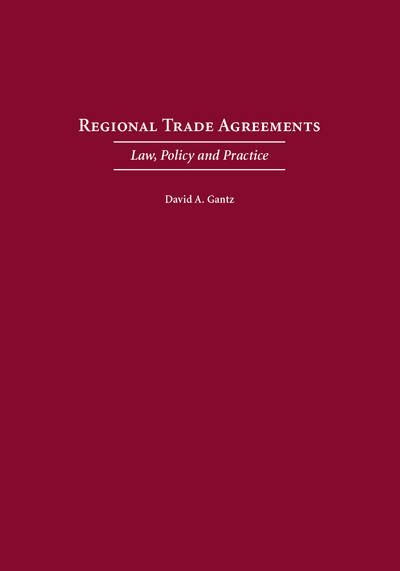 by David A. Gantz

The proliferation of regional trade agreements ("RTAs") is one of the most economically significant, politically important and, for some, troubling developments within the world trading system since the WTO Agreements entered into force in 1995. The WTO Secretariat has predicted that by 2010 nearly 400 such "preferential" trade agreements could be in force, with many WTO Member States being party to multiple RTAs. This movement toward increased regionalism may accelerate if the Doha Development Round of WTO negotiations remains stalemated, but will likely continue regardless of whether Doha is ultimately concluded.

This volume is designed to introduce the reader to the world of RTAs, for general understanding of the place of RTAs in the global trading system, appreciation of the context and legal content of particular RTAs, and as a basis for further study and analysis. (An extensive bibliography and list of Internet links are included.) Part I discusses the economic, policy and developmental issues arising from regionalism, and then considers the WTO legal regime as it affects and is affected by RTAs. The focus there is on free trade agreements ("FTAs") and customs unions ("CUs") regulated by Article XXIV of GATT 1994 or Article V of the General Agreement on Trade in Services, and on efforts within the WTO regime to minimize the negative effects of such departures from the core GATT/WTO principle of non-discrimination (most-favored nation treatment).

Part II discusses the multiple FTAs concluded by the United States with various trading partners since 1985, beginning with an analysis of the political, legal and policy considerations that affect the United States' ability to conclude international trade agreements. Extensive coverage is given to the North American Free Trade Agreement ("NAFTA") and to the Central American — Dominican Republic — United States FTA ("CAFTA-DR"). NAFTA is important because it represents by far the largest trade volume generated under any U.S. FTA, and because it has become the model for most subsequent U.S. FTAs, as well as many concluded by other nations. CAFTA-DR embodies legal changes reflecting ten years' experience under NAFTA. It also exemplifies the increasing use of FTAs by the United States as a mechanism for encouraging economic development, democratic institutions and the rule of law. Analysis at varying levels of detail is provided for all other U.S. FTAs, including those with Colombia, Panama and Korea, for which Congressional approval is pending, and for the unique bilateral trade agreement with Vietnam.

Part III analyzes five other important RTAs: The European Union ("EU"), Central American Common Market, MERCOSUR, South African Customs Union, and ASEAN FTA. These diverse accords each play an important role in the intra-regional political and economic relations of the parties, and exemplify a broad range of ambitious approaches to expanding intra-regional trade and commerce on four continents. The EU is likely the most successful RTA in history, and serves as a model for other CUs, including those discussed in Part III.

Like globalization, the RTA phenomenon is here to stay. WTO member government officials, international practitioners and law students aspiring to careers in international trade law must learn to deal effectively with the challenges and opportunities presented by such agreements.

"Regional Trade Agreements: Law, Policy and Practice makes a useful contribution to existing literature and will be particularly helpful to governmental officials, academics, practitioners, and postgraduate students wishing to learn more about the how and what of RTAs. Readers searching for information about a particular agreement can gain knowledge and understanding by reading a single chapter dealing with a particular agreement, but reading the entire book will allow the reader to more fully benefit from both the insight and experience of the author as well as to fully understand the interplay between politics, economics, and law in the RTA negotiating and implementation process." — World Trade Review

"By presenting a comprehensive introduction both to RTAs in general, and by providing comprehensive introductions to many RTAs that are in force throughout the world today, Professor Gantz has written a text that should be used by both practitioners and students who wish to gain an understanding of RTAs and their relationship with international trade and foreign relations." — Trade, Law and Development

"Gantz expertly weaves economic and political considerations into his legal analysis.… Regional Trade Agreements: Law, Policy and Practice makes a useful contribution to existing literature and will be particularly helpful to governmental officials, academics, practitioners, and postgraduate students wishing to learn more about the how and what of RTAs." — The Journal of World Trade Review