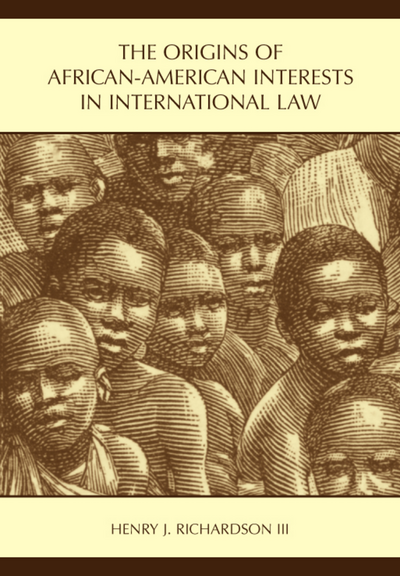 The Origins of African-American Interests in International Law

This book explores the birth of the African-American international tradition and, particularly, the roots of African Americans' stake in international law. Richardson considers these origins as only formally arising about 1619, the date the first Africans were landed at Jamestown in the British North American colony of Virginia. He looks back to the opening of the European slave trade out of Africa and to the 1500s and the first arrival of Africans on the North American continent. Moving through the pre-Independence period, the American Revolution, the Constitutional Convention, and the Westward Migration, the book ends around 1820.

This historical period also roughly corresponds to two other key historical phenomena greatly affecting the Atlantic Ocean basin: the rise of international law as a modern legal system (including European states and their Atlantic colonies) and the rise and flourishing of the international slave trade in African slaves to the Americas by European and New World governments and merchants. Only by placing African slavery in the British North American colonies in the context of the international slave system encompassing and linking the New World can the voices, struggles, demands, claims, and decisions of slaves and Free Blacks in North America towards freedom, relative to their evolving interests under international law, be properly understood. These interests comprise no less than the birth of an African-American international jurisprudence.

"This magnificent study by Professor Richardson of the relevance of international law to the struggle of African Americans against slavery and the slave trade of the course of several centuries deserves the widest possible reading. Such an outstanding jurisprudential account of anti-slavery resistance from the perspective of slavery's captives fills a crucial gap in the scholarly literature. It is a great contribution." — Richard Falk, Albert G. Milbank Professor of International Law and Practice Emeritus, Princeton University, and Visiting Professor of Global and International Studies, University of California at Santa Barbara

"Richardson presents a thorough analysis of African American interests in international law and how principles emanating from outside law have historically been linked to Blacks' appeals to quality and freedom. The book is most appropriate for the graduate and professional (law) level and would be suited for courses in African American/American History, Race and the Law, and American Legal History." — Law & Politics Book Review

"Richardson has written a decidedly original and provocative volume that is a fascinating, intriguing, and tremendously informative read… [T]his book is a treasure trove of information… The depth of research, which must be commended, and Richardson's astute analysis make this volume a useful one for any library and an absolute necessity for institutional collections." — The American Journal of International Law