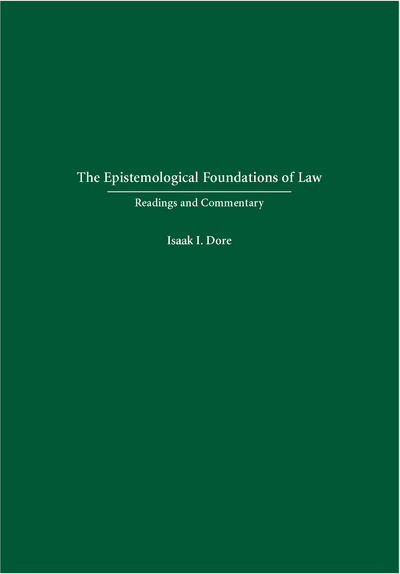 The Epistemological Foundations of Law

by Isaak I. Dore

This book differs from a standard jurisprudence text in that it examines law as a truth claim. Its major question is whether there are any eternal truths about the law, and, if so, whether they are knowable. Examples of questions discussed are: What is the correct foundation of law? Is it knowable? What is its source? What is the role of reason? Does reason exist apart from the "sources" of law, in the Cartesian tradition separating mind and body (res cogitans and res extensa)? What is the nature of the obligation to obey the law and how does it arise? What is the nature of the connection between law and morality?

These periods are intended to serve as analytical categories on which the organizational framework of the book rests. They also serve as evolutionary guideposts in an intellectual voyage, so that the reader gets an integrated picture of law not just as a social phenomenon but also as a truth claim, which, like all truth claims, can be critically evaluated.

"This book is a brilliantly conceived and executed exploration of the extent to which law is rooted in "truth": rational truth, perceptive truth, and moral truth. This question is obviously foundational to law, whether law is viewed practically or theoretically. Through keen selection of materials and sharp commentary, Professor Dore presents – in one volume – the best current treatment of these issues from a broad historical perspective. It is an engaging and critical achievement, important reading for anyone interested in law as a human institution." — Laura S. Underkuffler, J. DuPratt White Professor of Law, Cornell University Law School