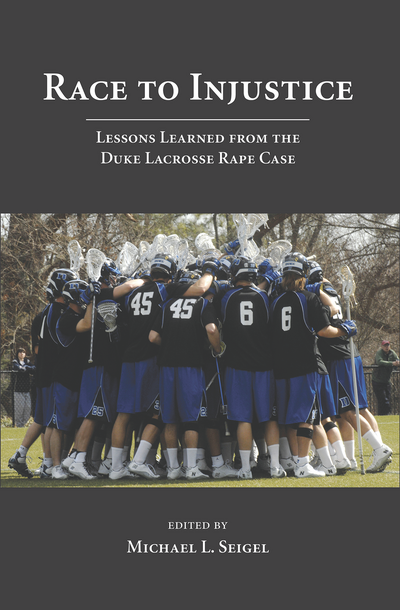 The American criminal justice system, though undoubtedly one of the best in the world, is far from perfect. Every once in a while a notorious case comes along and reveals its uglier side––for instance, its differential treatment of whites and people of color. Such cases often garner huge amounts of national media attention and capture the sustained interest of a normally restless American public. Whatever their outcome, they provide academics with exceptional opportunities to study, learn, and teach about the justice system. They also offer the chance to study related matters, such as the conduct of particular law enforcement and other officials, as well as the underlying causes of crime and the public's reaction to it.

The Duke lacrosse players' rape prosecution is one such case. One evening in March 2006, members of the lacrosse team held an off-campus party where alcohol was served and two erotic dancers were hired to perform. A disagreement broke out between the dancers and the players; later, one of the former, Crystal Mangum, alleged that three players had raped her. Mangum was black and relatively poor; the accused were white and relatively privileged. Up for re-election in a jurisdiction with many African American voters, District Attorney Mike Nifong pursued the case very aggressively. He used questionable identification procedures and was unusually outspoken in numerous local and national media appearances. Even after DNA evidence indicated that the defendants had not engaged in sexual activity with the victim, he declined to drop the charges. Worse, he hid other exculpatory DNA evidence.

The case split the Duke campus, the Durham community, and observers at large into sharply divided factions. Desperately trying to preserve its hard-won reputation as an upper-echelon school, the university cancelled the lacrosse season, suspended the three indicted players, and commenced a series of internal investigations. After months of dramatic twists and turns, the North Carolina Bar Association charged Nifong with violating several ethics provisions based on his handling of the prosecution. Within days of being charged, Nifong relinquished the case to the North Carolina Attorney General who, after reviewing the proof, dismissed all remaining charges against the lacrosse players and publicly declared their innocence. After a thirteen-month ordeal, the case was finally over. Eventually, the disgraced Nifong was disbarred.

"This book is a fascinating expose. The story of this shocking case is an unforgettable reminder of what can go wrong when politics and justice collide. It is full of lessons to be learned by anyone interested in prosecutorial discretion, sexual assault, campus administration, evidence, media coverage of crime, grand juries, college drinking, race relations, or wrongful convictions." — Nancy J. King, Lee S. and Charles A. Speir Professor of Law, Vanderbilt University School of Law

"A wonderful compilation of materials that provide an incredibly insightful look at many facets of law and society through the lens of a single case." — Ellen S. Podgor, Associate Dean and Professor of Law, Stetson University College of Law

"This book not only provides all of the rich factual detail that one could want about one of the most conspicuous legal cases of our generation, but also delves deeply into its legal, sociological and cultural ramifications. Its impressive array of prominent authors uses the occasion of the Duke lacrosse prosecution to help us learn a surprising number of nuanced and trenchant lessons about our legal system, our society and ourselves." — Christopher Slobogin, Milton Underwood Professor of Law, Vanderbilt University Law School

"The edited volume covers a broad terrain and touches on a number of important issues, most significantly the role of prosecutors in the justice system… The breadth of the book provides a wide range of readings for people interested in just about any angle of this peculiar case." — Law & Politics Book Review

"The essays are tight, clear, well written, and well documented. This collection is highly recommended for anyone interested in social justice issues." — CHOICE Magazine