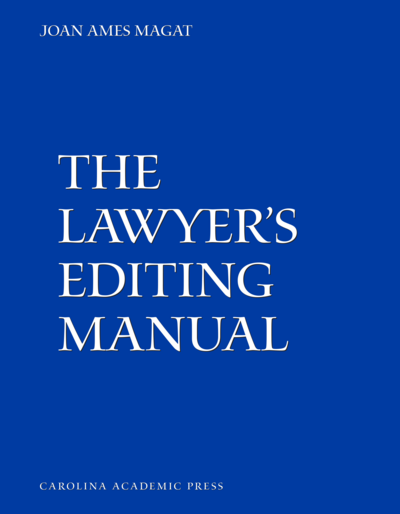 While other manuals cover citation conventions, The Lawyer’s Editing Manual covers all the rest that the legal writer — and the editor — ought to know: conventions that underlie effective formal prose, including grammar and punctuation, the effective use of quotations, and usage and style. “Rules” — meaning conventions most universally accepted — are stated, but so are their exceptions and, when possible, the logic for each.

The legal writer’s ability to communicate to the reader directly and clearly is guided not just by “correct” prose, but by stylistic conventions that further its effectiveness. The Lawyer’s Editing Manual thus includes advice on unambiguous word choice and modifier placement, conciseness, sentence and paragraph structure, and effective transitions. The manual ends with conventions inspired less by consensus than by the reader’s reliance on consistency, such as whether and what to capitalize or how to treat abbreviations, symbols, and lists. For these, it matters less what the writer or editor chooses to do than that the choice be consistently applied: such details should never distract from the sense of what is being written.

In short, The Lawyer’s Editing Manual will help legal writers craft or edit clear, concise, connected prose. It is an invaluable tool to ensure that the writer’s message reaches the reader’s understanding enhanced, not impeded, by the form of its communication.

“The Lawyer's Editing Manual is the definitive handbook on legal style. Magat has given legal scholars and law journal editors a tour de force of the common grammatical and stylistic traps — and the ways out — in legal writing. Her explanations are extraordinarily lucid and comprehensive. In short, Magat has done the legal profession a great service with this manual.” — Francesca Bignami, Professor of Law, George Washington University Law School