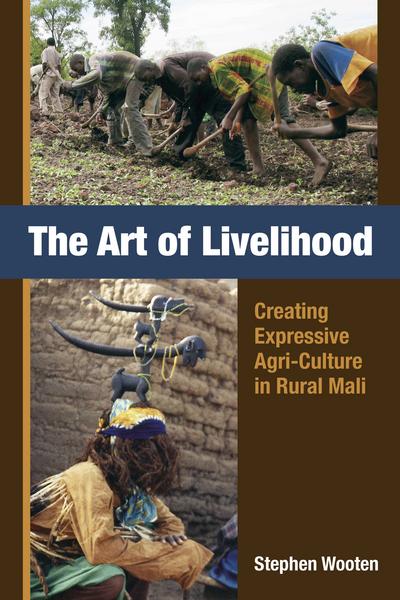 The Art of Livelihood

To the casual observer, farming on the Mande Plateau in central Mali looks rather traditional, involving hand tools and crops that date back centuries. The same might be said for the region's famous antelope (ciwara) headdresses and dances, which have ancient origins. Yet Stephen Wooten tells a story of the essential dynamism of agriculture and masquerade, understood as linked processes of performance. Food production and masked dancing play out a common local aesthetic centered on the paired vernacular concepts of fadenya (father-childness, individuality and improvisation) and badenya (mother-childness, community and stability). As farmers balance old subsistence and new cash crops, they do not build narrowly on the most historically familiar or economically beneficial system. They instead construct a livelihood that meets a combination of needs and desires, both material and ideological. In masked performance, key rituals and forms shift in similar ways, with active negotiation over aesthetic styles, social roles and symbolic schemas. In both contexts, we find neither unfettered agency nor structural determinism, but a complex interplay of the two, mediated by a local concern for keeping the impulses of fadenya and badenya in aesthetically proper balance. Wooten's rich and detailed ethnography reveals the artfulness, creativity and local sense-making behind both dimensions of expressive agri-culture. His study contributes to debates in cultural anthropology, folklore, art history and African studies and within the realms of practice theory, performance studies and aesthetic analysis.

This is the first book in the Studies in Cultural Creativity Series, edited by the book's author, Stephen R. Wooten, University of Oregon.

"Stephen Wooten's innovative study shows that the pursuit of livelihoods and the creation of art forms in the Mande Plateau are a unified practice, with common aesthetic principles. The study of agriculture is understood in relation to local philosophical and aesthetic ideas, while the study of masquerade is securely embedded in the social and economic life of the region. The result is a uniquely integrated and rounded portrait of a community simultaneously improvising and recreating core values in the face of changing conditions. Based on long-term engagement with southwestern Mali, this book shows how socio-economic and cultural analysis can fruitfully be brought together." — Karin Barber, Professor of Cultural Anthropology, University of Birmingham (UK) and editor of Africa: the Journal of the International African Institute

"Owing to the extraordinary richness and profound historical significance of Mande culture, several decades of scholars have explored endlessly intriguing avenues of inquiry and rummaged in many a dusty corner of the subject's more esoteric aspects. Over the years many distinguished studies have emerged, and now Stephen Wooten's The Art of Livelihood can be added to a list of works essential not only to research specialists, but also to any serious student of West African culture. Exhibiting superb scholarship, impeccable methodology and refreshingly clear analysis, the author illuminates the blend of art, spirituality and social dynamics that form the basis of strategies for grassroots economic survival, escorting his readers on a sensitive, colorful journey into the endlessly challenging world of Mande village farmers." — David C. Conrad, Professor Emeritus, State University of New York at Oswego, and former President of the Mande Studies Association

"Taking his cue from his Bamana interlocutors, Stephen Wooten embraces an aesthetic framework that understands both farming and masquerade as performance. As a result, this book demonstrates not just that these two seemingly separate domains are interconnected, but also that both farming and masquerade are sites for creative agency in the lives of post-colonial, rural Mande people. It offers artful, detailed, narrative descriptions of Bamana daily life and ritual activities, as well as incisive analysis that synthesizes ethnographic research findings with the abundant literature on Mande social structure and aesthetics. Essential reading for scholars and students interested in performance studies, practice theory, aesthetic anthropology, African art history, and African studies." — Daniel B. Reed, Associate Professor of Folklore and Ethnomusicology at Indiana University and author of Dan Ge Performance

"The Art of Livelihood provides a new and unique perspective on Mande farmers, contextualized in two sociological constructs that play an important role in both maintaining continuity and engendering change. Meticulous in its scholarship, and textured with insightful analyses, it is a pleasure to read." — H-Net: Humanities and Social Science Reviews Online

"Wooten's narrative is refreshingly uncomplicated, offering undergraduate and graduate-level students a highly accessible introduction to rural life on Mali's Mande Plateau and to the seminal thinking of regional scholars. … The Art of Livelihood combines solid ethnography with capable analyses and offers a fresh perspective on creativity and meaning-making in agricultural and ritual practices. This is a welcome addition to course reading lists in both anthropology and art history." — African Arts