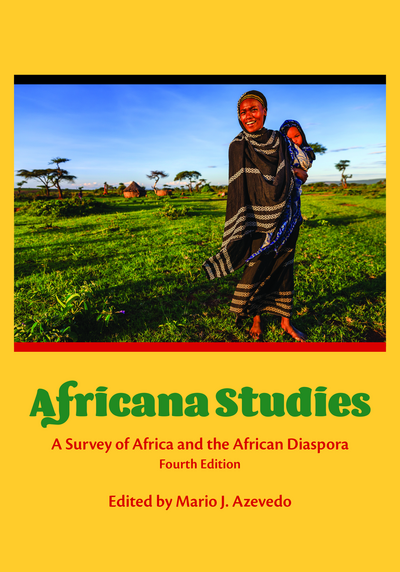 A Survey of Africa and the African Diaspora

This fourth edition of Africana Studies: A Survey of Africa and the African Diaspora comes at an important time, as Africans on the continent and their descendants in the US and in the Caribbean and Latin America and all over the globe are attempting to free themselves from the shackles and legacy of slavery, conquest, colonialism and neo-colonialism, discrimination, and dependency, and to consolidate the gains they have made over the past centuries. Yet, in spite of all advances and the new place they occupy in world affairs, many peoples of African descent are desperately still struggling to overcome war, fear, disease, political dissention, corruption, mutual distrust, and human rights abuses.

Historian and Professor Mario Azevedo and his colleagues have attempted in this volume to present aspects of the black world by exposing students, faculty, and other readers to the experiences, achievements, and aspirations of those who have long been considered to be the "Wretched of the Earth." This book covers the turbulent but also compelling themes of the lives of continental Africans and those in the Diaspora—their history, which transcends millenia; their human expressions in art and music; the uniqueness of their manifestations in literature; their efforts at eliminating disease and pestilence; their traditional religions and the interpretation of the cosmos; the state of their science, sports, and business; the plight of their most vulnerable, such as women, children, and the poor; their interaction across the continents; and the many other critical issues that affect the lives of people scattered across the globe.

The fourth edition of Africana Studies is a succinct, accessible, and readable source of knowledge, written by experts, that covers the black world in-depth and with breadth. Professor Azevedo and the other contributors have created a compendium of knowledge that looks at both traditional and contemporary theories in the field of African and Diaspora Studies, while also providing a glimpse of what the future holds.

"[This book] attempts in one volume to present more accurately the experiences and contributions of the African world. It introduces readers to the most comprehensive account of black interdisciplinary subjects to date and summarizes the research of specialists in a variety of fields… The number of contributors, variety, and depth of coverage show that the work was carefully thought out."
—Insights, on an earlier edition