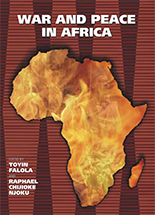 War and Peace in Africa

War and Peace in Africa provides the reader with important background information on the driving forces behind the continent's civil wars and conflicts. The book strives to put the myriad of normative and theoretical issues that result in conflicts and wars in Africa within their historical and global contexts—thus resonating the continuing struggles to achieve a more peaceful and viable postcolonial order. With the benefit of their multidisciplinary approaches, the contributors each present expert perspectives on diverse aspects of both civil and regional conflicts in unique ways that together elucidate our understanding of the interactions among nation building, ethnonationalism, armed conflicts, and state collapse. The emergent themes convey a harrowing reality that war and peace have been close companions in history. Most modern states in Europe, Asia, and the Americas are products of war and nationalist struggles. Similar dynamics best explain the havoc and sense of despair these wars have brought upon Africa. The struggle for peace becomes a war that must be won because it is only peace that provides a sturdy foundation upon which the future of humankind can be firmly established. That is why the crises-ridden African postcolonial state has more than ever consumed the attention of students of ethnonationalism and conflict resolution in recent times.

This book contains twenty-six chapters divided into three parts. Part A contains three chapters focusing on the contexts and causations of wars and conflicts. Part B is made up of nine chapters dwelling on wars and conflicts resulting from Africa's contact with Europe. Part C has fourteen chapters highlighting wars and post-war reconstructions in the postcolonial era. Overall, the emerging themes from War and Peace in Africa call for a serious reflection on the future of the postcolonial state. Reflecting on the meaning of state legitimacy particularly in conflict zones, the authors pose the following crucial questions: Is the postcolonial state viable as is? Is there a fundamental problem with the exercise of power and the formula for redistribution of national resources that provokes violent responses from minorities and the powerless? The answers are refreshing.

"This well-produced, 600-page book presents the edited conference papers accompanied by useful bibliographies for each chapter and 52 illustrations and maps. … Summing Up: Recommended. All academic levels/libraries." — CHOICE magazine

"One of the great strenghts of the volume is that it brings together so many experienced scholars to discuss various topics and regions systematically. . . . [T]his well-researched volume is an important contribution to African war and peace studies." — African Affairs