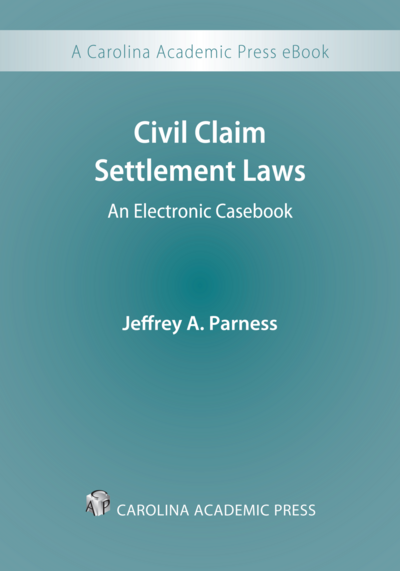 Civil Claim Settlement Laws examines the major legal guidelines for civil claim settlements occurring in and outside of American trial courts. It covers amicable resolutions of both federal and state law claims. It includes topics addressed not only by civil procedure laws, but also by contract, tort, professional responsibility, insurance and evidence laws, thus anticipating an intradisciplinary law school course. The materials include consideration of both partial and complete settlements of civil claims which have not yet arisen (e.g., premarital agreements); have arisen but have not yet prompted litigation (e.g., agreements regarding insurance company payments); and, have been presented in litigation. The materials emphasize the differing roles of the key players, including the actual or potential parties and interested nonparties, as well as their agents or representatives, including parents, employers, insurers, subrogors, and lawyers.

This book is intended both to help develop good lawyering skills and to explore the procedural, substantive, and ethics laws guiding civil claim settlements. The materials are best employed with students who have already studied Civil Procedure, Torts, and Contracts and are suitable for a pretrial practice class, a seminar, or an upper level elective in a law school. They combine a study of some procedural, substantive and ethics laws reviewed in other courses with a study of laws not covered much elsewhere, including the Federal Arbitration Act; the laws on public access to court proceedings; subrogation, contribution and indemnification; collateral sources; and Mary Carter and other partial settlement agreements.