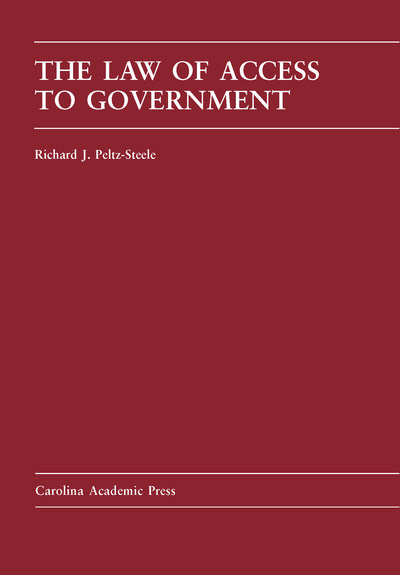 The Law of Access to Government is the first casebook dedicated to freedom of information law. Using the case method, the text approaches the law and policy of public access to information under government control, including records, meetings, and places. Students are guided through the materials with introductory and transitional texts, and extensive notes and questions to form the basis of class discussions and further research. The text is designed for use by students at any level of law or mass communication study, assuming no previous knowledge of constitutional law or statutory access. At the same time, students versed in the First Amendment or in mass communication policy and practice will find ample material to further develop their mastery of the freedom of information system in the United States.

The Law of Access to Government covers both state and federal law, and all three branches of government. The text is divided into three parts and ten chapters. The first part introduces access to government with the common law and constitutional precepts that still animate access to the judiciary today. Coverage ranges from staples, such as Richmond Newspapers, to current issues such as mistaken disclosures and prior restraints, and secret-docket scandals. Part two focuses on access to the executive branch, and includes the federal FOIA and open meetings laws, the special problems of access to law enforcement and corrections, and a chapter dedicated to homeland security and the war on terror. Coverage ranges from the essential DOJ v. Reporters Committee to death chambers, state secrets, and terrorism prosecutions. Finally, part three examines specific policy and problems in open records and open meetings, such as personnel exemptions and meeting remedies; electronic access, such as personal privacy and new communication protocols; and scope-of-statute issues, such as separation of powers and privatization.