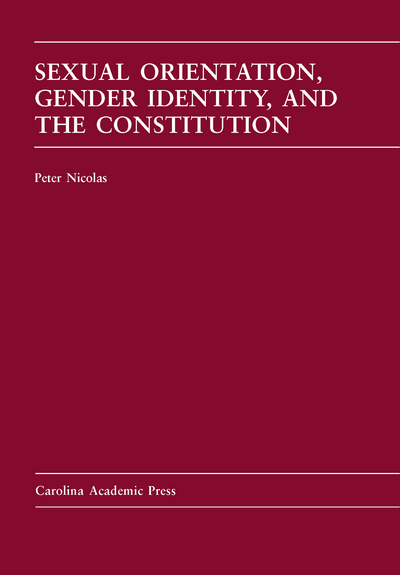 In this textbook, Professor Nicolas incorporates his expertise in constitutional law, federal courts, and sexual orientation, gender identity, and the law to provide a comprehensive approach to studying constitutional litigation involving the rights of sexual minorities.

The book first addresses threshold questions regarding the definitions of sexual orientation, sex, and gender, setting the stage for the question of “immutability” and the status-conduct and speech-conduct lines that arise in the substantive materials that follow. Next, it addresses procedural obstacles that play an increasingly prominent role in constitutional litigation involving the rights of sexual minorities, such as standing, mootness, abstention, and the precedential weight of summary affirmances by the U.S. Supreme Court. Finally, it examines the key constitutional doctrines that arise in litigation regarding the rights of sexual minorities—substantive due process, equal protection, and First Amendment—in a variety of contexts, such as marriage, parenting, and public employment. The book thus replicates the stages of analysis that arise when litigating any such case from start to finish.