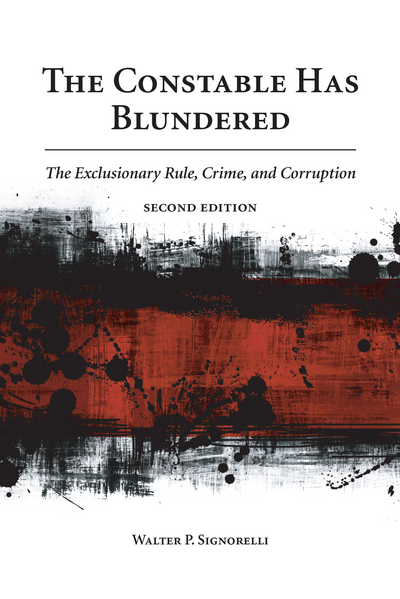 The Constable Has Blundered

The Exclusionary Rule, Crime, and Corruption

The Constable Has Blundered: The Exclusionary Rule, Crime, and Corruption examines and explains how the exclusionary rule undermines the purposes of the criminal justice system, increases crime rates, dispenses unequal justice, and encourages police corruption. Professor Signorelli uses concrete examples and cases to demonstrate the connections between the rule and its problematic consequences. The book explains how unequal treatment of defendants, denial of justice to crime victims, and perjury by police officers to circumvent the rule taint the criminal justice system, and how a tainted justice system spreads ill effects throughout society.

This second edition includes a new chapter regarding the exclusionary rule problem in the war on terrorism as manifested by the acquittals of Ghailani in his trial for bombing the US Embassies as well as another new chapter regarding the exclusionary rule in relation to advances in technology that intrude on individual privacy, particularly GPS tracking. Other additions to the new edition include coverage of recent cases from the Roberts court and two new classroom problems in the appendix.

"In The Constable Has Blundered, criminal defense attorney and former longtime police officer Signorelli argues that the exclusionary rule should be eliminated, if not significantly curtailed. The author successfully demonstrates troubling inconsistencies in judicial application of the Fourth and Fifth amendments and their harmful effects, most notably corruption, equal protection violations, and justice denied to crime victims. The detailed discussions of the case law—both the legal rules and practical effects—are valuable for students and practitioners alike, particularly the too-often ignored state cases… Summing Up: Recommended." — CHOICE Magazine (on the first edition)