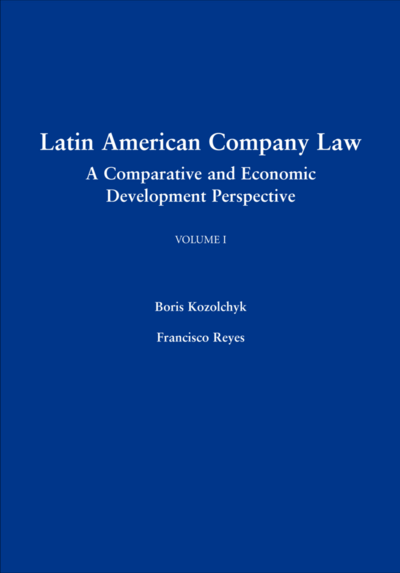 A Comparative and Economic Development Perspective

Some Latin American countries are experiencing unprecedented sustained economic growth while others stagnate. Yet, these nations have much to offer to the rest of the world, materially and spiritually. The two volumes of Latin American Company Law aim to create a better understanding of Latin America’s company law as a tool for harnessing development capital, local and foreign, and for developing a broader class of traders, investors, lenders and corporate managers. In pursuing these goals, the authors and editors share a belief in a comparative analysis that the National Law Center for Inter-American Free Trade (NLCIFT) refers to as ‘contextual’: legal institutions are examined not only in light of the legal system to which they belong but also as a product of their normative purposes and socio-economic environment. Thus, prospective investors in and lenders to Latin America as well as their legal and economic advisors will learn about the legal and cultural or institutional obstacles to capital formation and financing, especially at the bottom of the economic pyramid.

Company lawyers, bankers, law and economic development scholars and teachers, corporate and financial regulators and officials of multinational development and lending agencies world-wide will find much of interest in the reasons, and in some instances, cures for: a) the lack of secured or asset-based lending, b) unnecessary formalities, c) emerging limits to limited liability, d) protection of minority shareholders, e) challenges of disproportional ownership, and f) regulation or non-regulation of large corporate groups. Readers will learn how uniform legislation on the new (largely electronic) patterns of holding corporate securities could be successfully drafted. They will also learn why they should not legislate and/or regulate on limited liability companies and mutual funds using the Spanish models. They will also profit from knowing about the increasing use of company arbitration in Latin America and Spain and about the promising efforts to attain simplicity and uniformity in European private company law. These features are so important in a globalized marketplace that the entire second volume is devoted to the most successful experiment in recent memory to simplify and liberalize the creation and operation of corporations in Latin America.