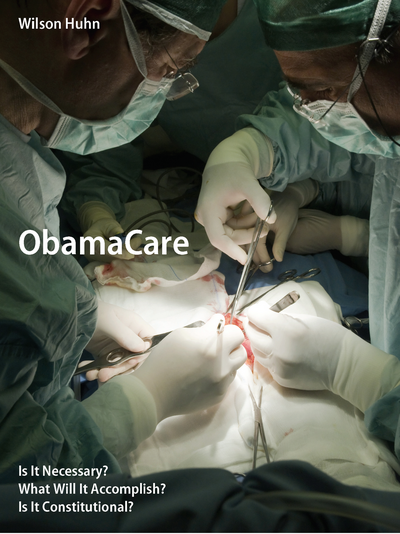 Is It Necessary? What Will It Accomplish? Is It Constitutional?

In clear, concise language, this book seeks to explain the controversy surrounding the Patient Protection and Affordable Care Act (the PPACA, often called "ObamaCare") that was signed into law by the President on March 23, 2010. In 2012, the Supreme Court will rule upon the constitutionality of this law. In addition, this law promises to be the central issue of the 2012 presidential campaign. This book is required reading for anyone who seeks to understand this vital issue.

Part I of the book explains the crisis in health care that America is facing. This portion of book gathers in one place the studies, surveys, and economic reports that bear upon the problem. It is filled with charts and graphs based upon these sources; showing, for example, the rising cost of medical care relative to Americans' income and the overall health of the American people compared to the people of other countries. Part II describes the PPACA: whose idea it was, what the law says, what it seeks to accomplish, and the justifications that Congress wrote into the law itself. Part III discusses the constitutionality of the law: what parts of the Constitution are involved, what the legal issues are, what the lower courts decided, and all of the considerations that the Supreme Court is likely to take into account in its final ruling.

This book is eminently readable. It has a simple yet logical structure that allows readers to quickly find the information they seek. The complex economic and legal issues are presented in a common sense format that will allow American citizens to make up their own minds about this law.

ObamaCare will be available only on Amazon in kindle format.